As spring gets into its stride in the UK it is a great time to watch as plants come into flower, and especially here as they are shown off and exhibited. This was prompted for me by some displays put on by the local AGS Groups at the Hillside Centre at RHS Wisley. These, organised by Jon Evans (one of the finest photographers in the Society) and other members, were aimed at showing gardeners the wonders of alpine plants. At the same time a fascinating variety of plants are flowering in and around the alpine houses at Wisley, making a great day out.

I was especially interested in the Fish Box troughs, discussed earlier on, and there were some nice examples of these. Also, one exhibitor in particular, David Philbey, specialises in growing choice alpines in tufa, and here is a fine example. If you are not so well off what about an old pair of boots!

There were displays of photographs showing all aspects of alpines, in the wild, in gardens, behind the scenes at Kew, and simply as very fine portraits, at which Jon excels. I found some of these of great historical significance; hence a picture of raised beds in Keith Lamb's garden in Ireland (Keith Lamb was an eminent horticulturist and involved in research into the propagation of plants), and the Doone Valley garden from the 1960's. 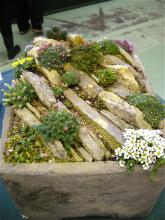 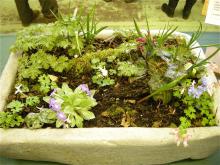 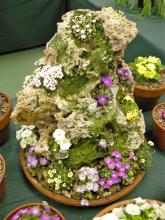 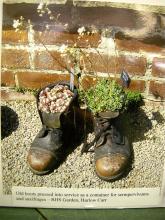 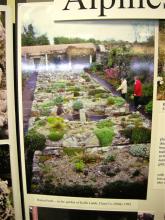 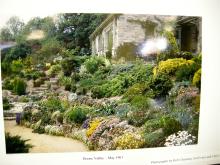 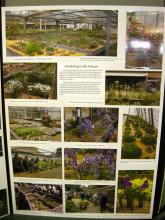 And some examples of flowers in the alpine section at Wisley - the alpine house had an especially good range of South African bulbs and succulents, like the delightful Delosperma sphalmanthoides. Outside it is saxifrage time with plants in troughs and growing in tufa, mostly in light but north facing aspects. 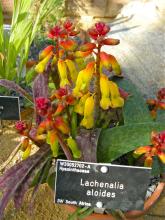 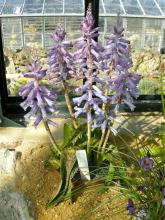 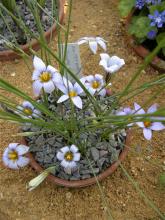 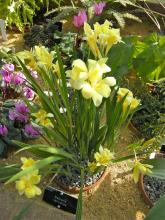 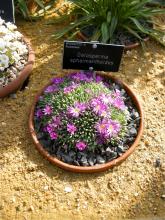 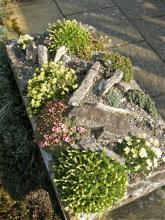 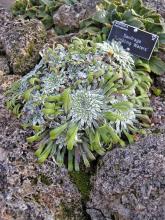 How I long to see some blooms!  I love the crevice trough and the tower tuga is spectacular.  I saw a similar trough at the International Meeting last year.  Amazing how many plants were used in the one display.  It really was a living piece of art.

Stunning, Tim!  Those troughs and alpine beds are to die for!!  Are the very large rectangular beds troughs or are they more like raised beds?  I love the sort of troughs, as shown, where the rock is built up high out of the top of the trough.  I wonder if this method has any drawbacks (re. hardiness) in very cold climates?Living pieces of art indeed!

Yes, raised beds Lori, but on a scale most of us would never think of. I'm not sure about hardiness of plants in troughs. On the whole such plantings are rarely protected except maybe for overhead cover to prevent them getting too wet over winter. I remember visiting Jack Drake's nursery at Aviemore, one of the coldest places in the UK, and I think the plants, if not the nurserymen, revelled in the place!

Hope to show some more examples of the alpine growers art, at least from down here in the south, as time goes on.

Some great stuff, Tim!.. I like the large raised beds... if I could afford the  materials, I'd love to have all/most my beds separated from the ground in this way- I think there are some maintenance advantages, and I like the contrast of structure outside and natural/informal/wild design within....

Very interesting, Tim!  You know, we have few if any such events here in Norway. I have visited one show in my lifetime: In Praha (Prague) in 1972. I was 19 and went by train (Interrail) with a friend through Europe and happened to come across this show.)

The Alpine Show in Kent has just come and gone, so a few examples of plants. This probably one of the Shows with the biggest variety of plants coming at such a good time of year - many saxifrages, primulas, bulbous species of all kinds, and early woodlanders. We are extraordinarily lucky to have such Shows but at the same time it can result in fewer gardeners concentrating on growing plants in the garden, so it is good to have a balance of the two.

I think Trillium nivale was the highlight for me, a plant of extraordinary beauty. But then what about Asarum trigynum, hardly beautiful but certainly extraordinary. Anemone biflora, was quite stunning and probably only growable in the alpine house, along with the fascinating relative of Cotton Lavender, Santolina elegans.

It was late in the day when I took pictures of the nursery areas, but these were completely full of people early on. These two nurseries are probably the finest two growers of alpines in the UK; Pottertons and Aberconwy, and Rachel Lever in the second picture is probably looking to have a glass of wine and a rest after an extremely busy day. There were many outstanding plants for sale.

Sorry - had a problem posting the pictures. 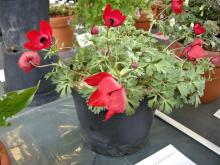 Although a lot of gems are displayed at the show my day had been made had I visited one of the nursery stands! I had probably gotten in trouble with the air company at the airport and with the authorities at home ;D

Trond - I brought my authority at home along with me to get over this problem!