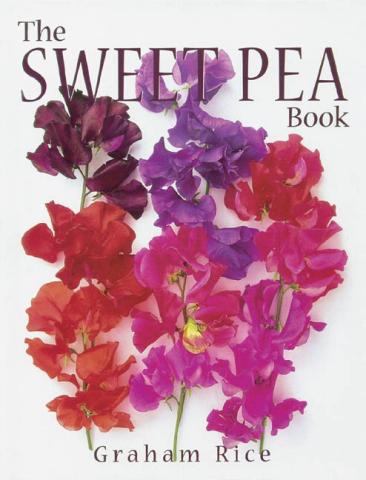 I am a sweet pea ignoramus. I tried growing them once, after reading an article in an early Fine Gardening issue. I thought they’d be just perfect climbing up the chicken wire fence surrounding the chicken yard, and after learning how fragrant they were, well, I couldn’t wait. They did rather poorly, and though I’m sure I chose a variety guaranteed to be fragrant, there wasn’t enough of a fragrance to make a lasting impression. Sigh.

Consequently I eagerly pulled The Sweet Pea Book by Graham Rice off my public library’s shelf when I spied it there a week or two ago. Timber Press books are known for going into the kind of depth that passionate gardeners crave, and I’ve enjoyed every book by Graham Rice that I’ve ever read, so it was a no-brainer.

Unfortunately, this book wasn’t written for as ignorant an ignoramus as I am when it comes to sweet peas. Don’t get me wrong; there’s plenty of useful information and it’s written well. It’s just that, well, it’s in the wrong order. The very first chapter is on the history of sweet pea breeding. If you’re really into sweet peas, you need to know this stuff, but if you’ve never grown sweet peas before, or if, like me, you’ve tried and failed, what you want to know most of all is how to grow them. That doesn’t come till chapter nine.

But you know, I’m enough of a flower geek to find all that breeding stuff interesting, especially the idea that breeders back then weren’t always too worried about making sure their seed came true before putting it on the market. Or that, “in the early years of [the twentieth] century, new Spencer varieties in the same colour as previous Grandifloras were often simply given a modified version of the Grandiflora name, e.g. ‘Flora Norton Spencer’ is the same colour as ‘Flora Norton’ but in the waved Spencer form.” (p. 38). My biggest problem was the terms he threw around: standard, keel, wings. Now, I know I have seen a diagram somewhere, sometime in the past, where these terms were illustrated, but as I was reading the book I couldn’t dredge it up from memory. But I thought to myself, “Surely there’s a illustration somewhere in the book labeling the structure of a sweet pea flower.” But, no. I’m sure the editor and author thought everyone knows what is the keel and what is the standard, but you see, I am a sweet pea ignoramus. Sigh.

Correction: I was a sweet-pea ignoramus. I now know I was doing just about everything wrong. The soil was not free draining enough or fertile enough, both of which I suspected, but it also wasn’t deep enough. That surprised me. In their native haunts, sweet peas germinate in the fall, sending down deep roots but growing slowly above. Then in the spring they grow quickly upward and get all their blooming done before the heat of summer. If you want them to do well, they’ve just got to get their roots down. So, there are sweet peas in my future. The area along the chicken fence has been rather neglected of late, but if I relocate the daffodils blooming there, and prepare the soil properly, I just might try sweet peas next spring. Actually, no “might” about it; the big “if” concerns the relocating and preparing, which I might not get around to. If I do find the time to do all that digging, I will definitely be planting sweet peas.

The very last chapter is about growing sweet peas in the United States:

It is a common misconception that sweet peas are impossible to grow in the United States. This, I have to confess, is often claimed by the British who like to think that they’re the best at everything horticultural.... Yet wild sweet peas are native to Sicily whose Mediterranean climate is matched more closely in some parts of the United States than in the relatively uniform cool British conditions

Mr. Rice then offers advice, based on climate more than geography, for various areas of the United States, covering what varieties to plant and when to plant them, and other tricks of the trade as appropriate. If you’ve been having trouble growing sweet peas, this chapter could be worth the price of the book for you.

The one thing Mr. Rice never discusses, and which I’ve always wondered about, is the use of legume inoculant. It’s suggested as being beneficial for growing garden peas (that is, the ones you eat as vegetables) and I wonder if it would help sweet peas as well. [Editor's Note: Nicking the seeds with a sharp knife or razor blade will also help.]

Oh, and I might as well confess, the book answered one more question for me, a question that has nothing to do with sweet peas. I always wondered why Graham Rice decided to take up a second residence in Pennsylvania. What was lacking in Great Britain that the United States supplied? The answer, dear readers, is on the back cover.

Review by Kathy Purdy,  reprinted from Cold Climate Gardening. Kathy is newsletter editor for the Adirondack Chapter of NARGS.