Heroes of Horticulture: Americans Who Transformed the Landscape 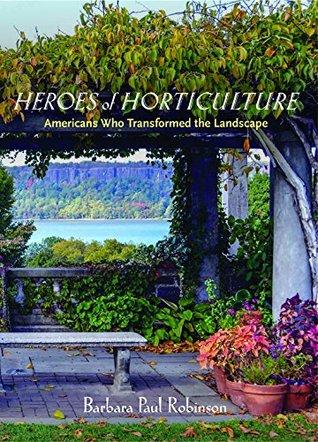 “Hero” is a big word in my book.  It implies that someone has done something extraordinary, perhaps even brave, overcoming obstacles to deliver something important or special.  Barbara Paul Robinson has written about eighteen heroes of horticulture – institution builders, garden creators and plant explorers who have had a major impact on the American landscape in our lifetime.  Some of her heroes are now gone, like Frank Cabot, but many are still alive and continue to enrich our landscapes.  What makes this book special is that Barbara knows or knew most of them and is able to tell their story from the point of view of a friend or collaborator.  They come alive in the book as she tells us about their personal relationship as well as their passions and quirks.

Barbara Paul Robinson is a passionate gardener herself, who with her husband Charles has created gardens at Brush Hill in northwestern Connecticut.  This hands-on, dirt gardener was also the first woman partner at Debevoise and Plimpton, as well as the first woman President of the New York City Bar Association.  What is extraordinary about her own story is that she took a sabbatical from the law firm and worked as a gardener for Rosemary Verey at Barnsley House and for Penelope Hobhouse at Tintinhull.  As she tells the story, she was treated as “staff”, had tea in the gardener’s hut, and worked in the cold soil of the British spring alongside the other gardeners.  She went on to write the Rosemary Verey’s biography and writes for many publications about gardening topics.

The book begins with profiles of three people who were prime movers in establishing and growing The Garden Conservancy – Frank Cabot, Tom Armstrong and Antonia Adezio.  NARGS members of course know that Frank Cabot got his start as a rock gardener and that Stonecrop still has prolific troughs and rock garden plantings stemming from his obsession. Barbara includes a poem he wrote about rock gardening, written for the fiftieth anniversary of ARGS

The ARGS Hymn or The Alpine Gardeners Lament

Does your horticultural life fail to sustain you?...

Have you tried gardening with alpine plants?

For they are so full of romance.

They are sessile and sweet,

And conveniently located down by your feet.

And their blossoms are visions of beauty –

lighting up all the screes and moraines.

Give them grit, give them rain,

give them snow, make sure they drain.

What Barbara makes clear is that it took more than the vision of Frank Cabot to create a sustainable Garden Conservancy – it needed the institution building and fundraising skills of Tom Armstrong and the organizational prowess of Antonia Adezio.  This triumvirate built the organization that was started from a vision in 1989 into the treasure it is today.

Another extraordinary story of transformation and institution building is the story of Central Park and other public parks and public spaces in New York City driven by the vision and hands-on work of Elizabeth Barlow Rogers and Lynden B. Miller.   The journey to create the verdant paradise that is the Central Park of today began in 1974, a troubled time in the city’s history and the park’s history as a scary, derelict no-man’s land.   By 1980 Betsy Rogers reached out to a neighbor and friend, Lynden Miller, a painter who had become interested in gardening, and asked her to take on the daunting task of reviving the Conservatory Garden.  This was the beginning of Lynden’s professional career in designing public gardens, where she has made her mark all around New York.  There’s a lovely quote in the chapter about Lynden Miller and her commitment to pubic garden spaces in that she believes that there’s an unspoken message in these places – “We did this for you and you are worth it.”

The next section of the book addresses the leaders of major public garden institutions:  Gregory Long, Elizabeth Scholtz, Marco Polo Stufano, Stephen Byrns and Dr. Richard Lightly.  Their paths to leaderships were very different.  We learn about their early work experiences, their mentors and their journeys to become transformers and leaders of NYBG, the Brooklyn Botanic Garden, Mt. Cuba and others.  All are stories of major transformation and growth during our lifetimes, with the gardens often emerging from a situation of scare resources to the robust centers of horticultural excellence that they are today.

The section about plantsmen, plant finders and nurserymen addresses the history and interests of Dan Hinkley, Pierre Bennerup, Darrell Probst, Andrew Bunting, Tony Avent, and Barry Yinger.  What is interesting is that so many of the people who now bring us cutting edge plants began their careers as nurserymen, but few still are.   Many of these larger-than-life characters often accompany each other on plant hunting trips that are often more than a little demanding and dangerous, making the moniker of “hero” totally appropriate.

The profiles of garden creators George Schoelkopf and John Fairey close the book.  Their artist’s eyes and collector’s zeal combined with a talent for creating structure have resulted in the treasures that are Hollister House in northwest Connectiruct and the very different Peckerwood in Texas.

The passion and vision of each of these American heroes has resulted in plants and garden ideas that can be seen in many of our own gardens.  I am grateful for their contributions to what has been a splendid time in the history of American horticulture, with much hope for the future in a world that truly needs the beauty and healing provided by gardens.

Alicia Whitaker gardens in a zone 7 garden on Long Island, where she serves as President of the Horticultural Alliance of the Hamptons. She also lives in NYC and is a member of the Manhattan chapter of NARGS.   Her garden is recovering from a major construction project that took a year, so she's rethinking her troughs and mixed borders and grateful that her plants didn't die after last summer's neglect.  She recently visited Normandy and was thrilled to visit Jardin Plume, a contemporary garden, and Le Bois des Moutiers, a Lutyens /Jekyll collaboration on the Normandy coast.