The genus Oxalis is the largest within the family Oxalidaceae. The genus is spread worldwide with species being found in every continent except Antarctica. The species diversity is particularly high in tropical Brazil and South Africa.

However, the species that are discussed in this article are mainly from the southern part of Argentina and Chile in the provinces of Santa Cruz, Chubut, Rio Negro, Neuquén and Mendoza, often summarized as Patagonia. This is a fantastic area with a huge variety of plants, which has left a great impression on me over the years.

The climate in the province of Santa Cruz in the far south is rather changeable. Especially in spring, when most plants awaken from their winter rest, temperatures are still relatively low, mainly 12C–15C (54F–59F), with rain or occasionally intermittent snow showers with almost continuous strong winds that can sometimes stir to violent storms.

During the winter months, from May to October, there is a lot of snow. This type of weather is clearly reflected in the vegetation that at low elevations of about 200 meters (650 feet) can be compared to the high alpine zone farther north. This rather unpleasant climate is caused by the temporary absence of the higher mountain ranges of the Andes.

Climate conditions change further to the north, where the Argentinian side of the mountains is mostly shielded by the Andes, and everything on the east side is quieter weatherwise, and also warmer and drier. In the provinces of Neuquén and Mendoza, spring and summer temperatures
rise to more than 30C (86F), which particularly benefits the famous wine regions of Mendoza. The immense areas of pampas east of the Andes
are very dry and empty with the only significant economic activity being based around large flocks of sheep and goats. Livestock owners can lead a solitary existence in their far-scattered estancias.

This is the southernmost common species of South American Oxalis with its range being predominantly in the southern province of Santa Cruz. The habitat for this species is distinguished mainly by the soils having relatively low humus, but rich and moist, typically on grassy and sandy slopes from as low as 200 m (650 ft).

The flowers are single and flower variation is extremely diverse from almost white to a beautiful dark blue colour. About the hardiness of
this species there are quite a few disagreements. My own experience is of growing it in an alpine house, or at least in a place where the plants are protected from extreme cold. Depending on climate situation some growers have positive experiences with the cultivation in the open rockery.

Vegetative propagation is easy since it has scaly rhizomes which can eas- ily be divided. This is best done in the fall when eve- rything is settling in for a winter rest. The best soil mix is one of peat with a fair proportion of basalt grit or at least of grit with a low pH value. It is of essential importance that drainage is perfect.

During the winter this species is no beauty at all, with nothing to see, but in the spring everything changes quickly with the emergence of the very attractive foliage and later the exuberant bloom.

We found the exceedingly beautiful subspecies Oxalis laciniata ssp. pubescens, which is not in cultivation, on the Passo Roballos at about 2200 m (7200 ft) altitude on a scree slope, a completely different environment to that in which we otherwise found the typical species.

Although this has a very wide distribution from Santa Cruz in the south to the province of Mendoza far to the north, it is only common on lava-like, sandy and stony soil, sometimes up to more than 3000 m (9800 ft) above sea level.

It can form cushions more than 50 cm (18 in.) across with the flowers usually one to a stem, occasionally two. The flowering time is relatively late in the spring through to mid-summer.

Cultivation of this species is quite easy. The winter hardiness is good, so a place in a light stony site (with low pH) is perfect.

There are not many forms of Oxalis adenophylla in cultivation. Almost always you see the same plants offered in garden centers or from breeders. To get something special in your collection, you’ll have to rely on specialized growers of these plants, although gradually these more varied forms, like those of O. laciniata are spreading around.

Sometimes there is a possibility of collecting seeds from a plant. To collect seeds however you need to have some experience. The problem is that once the seeds are ready for harvesting, they are catapulted spontaneously from their capsule. So you have to be very alert but it
is always exciting and interesting to see what the results are growing from seed.

Given that this the next most common species in cultivation after O. adenophylla, it is remarkable that it occurs only in the province of Santa Cruz, with Passo Roballos in northern Santa Cruz as its northern limit. In the south you will find this species, like O. laciniata, growing with other plants, but also on the most sandy and stony places. This variety of habitats, from wet grasslands to extremely dry and stony soils, helps explain the ease with which this magnificent species can be cultivated.

Growth is like O. laciniata with tuberous rhizomes and is easy to propagate by division. The flower color ranges from pale pink to intense dark purple and the flowers can be up to 3 cm (1.25 in.). Unfortunately most plants in cultivation are not the most dramatic. In the open garden it is on its best on a neutral to acidic stony place. Flowering is to be expected from April to June.

A common species in the provinces of Chubut and Neuquén at altitudes of 1,000–2,200 m (3300-6600 ft), this species grows in fine volcanic sand. With deep yellow flowers from a rhizomatous, loose green cushion, it is a species which has been grown in the past, sometimes from seeds. I have not yet had any experience growing this species nor with O. compacta, a plant occurring in the same places but easily identified with its compact growth with the green leaves changing to pale brown.

Little is known about this species. In 2012 we encountered this oddity in a single place in Mendoza. The location for this truly magnificent species was between coarse rocks which was extremely unusual among the species we observed.

This mat-forming species occurs from Neuquén northwards into Mendoza. The dry pampas is the ideal place where this species feels happy in dry volcanic sand. It is a striking species with its beautiful red- purple flowers. This plant does not seem to grow in large numbers in its natural habitat which surprised me: in cultivation it is a species perhaps best avoided since it can aggressively self-seed and expand massively.

In this survey of species, this is very much one of the most difficult to cultivate. It often grows in the most extreme places, for instance
at 2400 m (7870 ft) on the rocky cliffs of the Cerro Cathedral in the Bariloche region. The hard cushions grow on those places where wind and rain have their impact on the plants. During other expeditions we found this species in other places, but not with the perfection as those on the Cerro Cathedral (see p. 125).

The single sulfur-yellow flowers are stemless. This species grows from a rhizome but it is only possible to propagate from cuttings rather than by division. The problem in cultivation is to keep this species in optimal form. I’m growing a plant here in the greenhouse that can not be recognized from its original form. It has very loose growth and no flowers or sign of them until now. The biggest reason is probably the lack of ultra-violet light. We must probably accept that our climate is not suitable to grow plants such as these to perfection. Winter hardiness is no problem, but too many cloudy days and our warm summers make everything seem hopeless. If you see these plants in nature in such perfect shape, you always hope to be able emulate it, but that is something that often ends in complete disillusion. If you do have the possibility of getting a plant, the best advice seems to be to use a stony substrate and to give it the most light possible and a sheltered place. Also repotting every year is a must.

This is a rare species which we found just a few times in the province of Santa Cruz during all the expeditions we made over the years. To find this species you need to explore screes of mainly coarse debris. The highest altitude where we found this plant is about 2200 m (7200 ft). It’s very interesting to see how such a plant is able to maintain itself in such extreme places.

With the culture of O. loricata, I have to confess I am not so fortunate. Currently there are three forms in my alpine house. One flowered in 2013. The other two are still alive, but show little progress. It seems to me that O. loricata is a species which certainly deserves and requires more attention in the future.


The final conclusion of this article is, that the South American species from this genus deserve more attention from the alpine gardener than they have always had in the past. While species such as Oxalis erythrorhiza and O. loricata are plants that need a lot of care and are just for the more experienced grower, many of the others discussed are so beautiful and really worth the effort to build a big collection. Oxalis adenophylla and O. enneaphylla are well established, even if not in very many forms, but with the aid of specialist nursery owners it is worth every effort to try to get hold of more forms of them and of forms of O. laciniata. 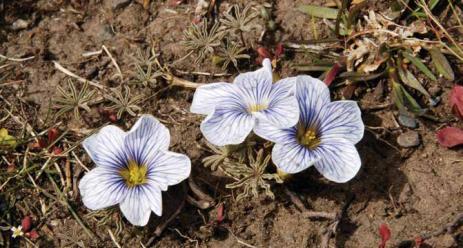