Rock gardening is all about – well, rocks and plants – and the largest concentrations of exposed rock are mountains. So as rock gardeners, we naturally love our mountain ranges and the plants that occur there. But in Michigan and the Great Lakes region, our mountains are humble. Though they were spectacular a billion years ago in the Precambrian, they are long retired, ancient ground-down nubbins, at most a little more than 2000 feet high. While these do have some fine scenery and plants, they are mostly all forested and other areas of exposed rock, lower, and more recent in origin, offer much more in the way of plants interesting to rock gardeners. The exposures are rock outcrops, mostly limestone, open or shaded, plus the present-day and fossil shores of the Great Lakes. These natural rock gardens, along with other open habitats like our dunes and beaches, do not have communities of alpine plants but they do have a selection of exciting and often-overlooked plants suitable for rock gardens, as well as beautiful plant assemblages for design inspiration. Note that, these plants are generally much more tractable in a lowland garden setting than most true alpines, and some perform admirably as “backbone” plants for our rock gardens.

The most diverse area for such plants centers on the Straits of Mackinac (pronounced Mackinaw!), marked by the 5-mile-long Mackinac Bridge, but extends in an arc traced by the Niagara Escarpment from the Bruce Peninsula of Ontario to the Door Peninsula of Wisconsin. These areas are underlain by sedimentary rocks: limestone, dolomitic limestone, and sometimes shale of Silurian and Devonian age (ca. 380–440 million years ago). These are mostly flat- bedded rocks, but in areas near the city of St. Ignace, a peculiar rock form occurs, called Mackinac breccia, which is a jumbled, complex rock type formed when great salt deposits in the original layered rocks were dissolved, and the rocks capping these cavities then collapsed into them as rubble. These masses of rubble were later re-cemented into irregular stone, which is quite interesting in the garden.

Where not buried by glacial deposits, the bedrock forms outcrops ranging from tall cliffs, to irregular ledges, to flat “pavements” known as alvars. In areas where the glacial deposits were washed away by past higher Great Lakes water levels, many boulders may also be found at the surface, sometimes in great abundance. In addition, the Great Lakes, with their changing water levels after the glaciers, formed great deposits of gravel and sand, some now quite far from the present shore, but some still forming on the shores today. This is the area where, despite being a glaciated lowland habitat, there are a number of endemic species, some of which are highly desirable rock garden plants. One interesting side note about virtually all these habitats is their relative youth, despite containing many interesting and rare species, including several endemics. Not only was the entire region completely covered by the most recent glaciation, but all but a few of the highest hills were also underwater during past higher-water phases of the Great Lakes.

In terms of sunny, open habitats, as in rock gardens, the rocky, gravelly, and sandy Great Lakes shorelines and open rocky areas back of the shores offer the most treasures. These areas have sweeping vistas, some exquisite floral shows and, in wetter areas, are known for their carnivorous plant diversity: compact pitcher plants (Sarracenia purpurea), here growing in very calcareous settings; three species of sundews (Drosera spp.); several bladderworts (Utricularia spp.); and even, very locally, butterwort (Pinguicula vulgaris). On the upper shores, among the dominant small grasses, sedges, and rushes, which are not to everyone’s tastes, are other tiny unsung treasures, often as important components.

The star is Iris lacustris, the dwarf lake iris, endemic to this small area. Unlike our tall marsh “blue flags,” this iris is a tiny plant of drier habitats: gravelly and sandy upper parts of shores especially, and also nearby alvars and gravel ridges. It is arguably the shortest iris in the world, often only 5 cm (2 inches) tall in flower, but may form extensive mats.

A more wide- spread plant is the tiny mint Clinopodium arkansanum. This has abundant violet-blue flowers on short up- right branches above evergreen creeping mats. Not only that, it also blooms for a long period in summer (late June through July in Ann Arbor). The fresh, minty odor is so strong that one smells this plant as soon as you step on it, often before seeing it. It is a superb addi- tion to rock gardens. Of similar habitat and distribution, but rarer and forming tiny cushions is Houstonia canadensis.

Scattered about will be the white camas, Anticlea (Zigadenus) elegans subsp. glaucus, blooming in summer, and of course, Casti- lleja coccinea, biennial, but with flaming red bracts (rarely lumines- cent yellow). Our only native primula, Prim- ula mistassinica occurs here, though often in moister sites, as does the abundant and showy, late blooming Parnassia glauca.

At the forest edge on the upper shores, usually there are yellow lady slippers, Cypripedium parviflorum var. pubescens, which nobody wants to exclude from a rock garden. The driest portions of the rocky upper shores, and also sand dunes, may be dominated by the dwarf evergreen creeping shrub, bearberry, Arctostaphylos uva-ursi, now popular in cultivation, and with it may also occur the wild form of creeping juniper, Juniperus horizontalis, even more popular in cultivation. Another dwarf shrub here, erect, but small enough for a larger rock garden is the shrubby St. John’s wort, Hypericum kalmianum. This is endemic to the Great Lakes region and a more delicate plant than the commonly grown shrubby species. Not often grown, but it is worth acquiring.

On rock shores, much rarer in Michigan though widely present on Lake Superior and locally in the northern reaches of Lake Michigan and Lake Huron, we can see some of the finest natural rock gardens. Here, additional dwarf species suitable for rock gardens can be found. If the rocks are moist, butterworts and bird’s eye primrose again are possible, and even Saxifraga paniculata. On the drier rocks, crevices can be filled with dwarf goldenrods, dwarfed shrubby cinquefoil, Dasiphora (Potentilla) fruticosa, and if the rocks are metamorphic or igneous, three-toothed cinquefoil, Sibbaldiopsis tridentata.

Sand dunes, like sandy, gravelly, and rocky shores, may also be dominated by bearberry and creeping juniper. But on dunes one can also see another evergreen shrub, the beach heather, Hudsonia tomentosa, showy but hard to grow. Another plant of dunes that is very fine in the garden, if you can establish it in a sand bed, is the hairy puccoon, Lithospermum caroliniense. This has masses of rich yellow flowers in late spring, on a mounding, bushy plant. Anticlea elegans is also prominent on dunes, with its green and white summer flowers. Dunes are formed along the lakeshore, and, when first formed, the sand has a high calcium carbonate content. But in time, the carbonate is leached from the upper layers and the surface becomes acidic. Older portions of dunes, and the many inland sand deposits of older origins such as “fossil” dunes from earlier, higher stages of the Great Lakes and the many sandy areas deposited soon after the glaciers left, now can support plants that tolerate or prefer acid soils. The most extensive areas of acid sandy soils in the northern Great Lakes region are probably the great jack-pine plains that cover much of the northern Lower Peninsula of Michigan. In addition to closed canopy forests, there are areas of barrens on these jack-pine plains, with open sandy habitat with short vegetation and a number of small showy plants suitable, if the soil is acid, for rock gardens or sand beds. Most notable among these is the finest eastern North American violet, the bird’s foot violet, Viola pedata, and again the three-toothed cinquefoil. Hairy puccoon is also here, as on dunes, along with other dwarf plants like carpeting Antennaria species and the dwarf pink milkwort, Polygala polygama.

Many of the same species as on the shores and sandy inland habitats also occur on one of the most distinctive habitats in the region, the unique glaciated limestone pavements, called alvars. These mostly occur inland from the actual shores, and are flat areas of rock, fully exposed and with moss and lichen cover, or with a thin soil layer with a turf of short grasses and sedges. They are then sparsely to liberally sprinkled with showy species, sometimes Iris lacustris, often Castilleja coccinea and Juniperus horizontalis, plus a few plants that are rare or absent on the present-day shorelines. Most striking among them is the lakeside daisy, Tetraneuris herbacea. This plant, very rare in Michigan, but more frequent on alvars eastward in Ontario, is a stunning yellow daisy, compact but very amenable to cultivation, and endemic to the Great Lakes region. Also on these alvars occurs the only endemic sedge of the northern Great Lakes region, Carex scirpoidea subsp. convoluta, a very compact dioecious species where the males have showy spikes of yellow anthers. Some alvars, especially eastward, also have the prairie smoke, Geum triflorum; and some other prairie elements occur, such as the showy, short prairie buttercup, Ranunculus fascicularis. But the remarkable feature of these alvars, or most of them anyway, are the deep crevices, called grykes. These grykes are formed over millennia by water dissolving the rock along cracks and joints in the limestone. I can’t help looking into them or even climbing down into big ones, although near roads they are often used for dumping garbage. Though not inhabited by many plant species, I am rewarded occasionally by a sight of some rare rock fern, most often fragile ferns Cystopteris fragilis, C. tenuis, and even C. laurentiana, but sometimes maidenhair spleenwort, Asplenium trichomanes, purple cliff brake, Pellaea atropurpurea, or even the rare northern holly fern, Polystichum lonchitis, all excellent rock garden ferns. Grykes offer a very different microclimate to the surface and though I’ve never heard of anyone building artificial grykes in their rock garden, it might be a way to grow some of the more delicate rock ferns. Finally, especially on alvars, but also on rocky shores, there are often gnarled arborvitae, Thuja occidentalis, dwarfed by the severe environment not genetics, but providing inspiration for using dwarf conifers in the garden.

The very rim of the Niagara Escarpment in this area does have some tall cliffs, which have some interesting plants, especially rock ferns, and even Draba arabisans, unfortunately not the showiest of its genus. But the areas of greatest interest on the Niagara Escarpment, in Michigan especially, are the lower forested outcrops. This is the realm of mosses and rock ferns, though many small forest understory plants are also at home in the rock crevices and ledges. Early in the spring, it is amazing how many hepaticas are nestled into and on top of the outcrops, and sometimes other woodland species, such as spring beauty, Claytonia caroliniana, Dutchman’s breeches, Dicentra cucullaria, violets, and even trilliums, making for beautiful compositions. Presumably, their fruits are carried up into these areas by ants. This is where the rare northern holly fern may occasionally occur in some numbers. It is evergreen and attractive whenever there is no snow, and much more rarely, the walking fern, green spleenwort, and even the legendary American hart’s tongue fern can be seen. Anybody contemplating a rock garden in a shaded setting would be rewarded by studying these expansive and remarkable natural rock gardens. In fact, all these habitats with small plants on rock, sand and gravel offer not only plants and design inspiration, but also lessons in how to grow the plants in our climate and garden settings. 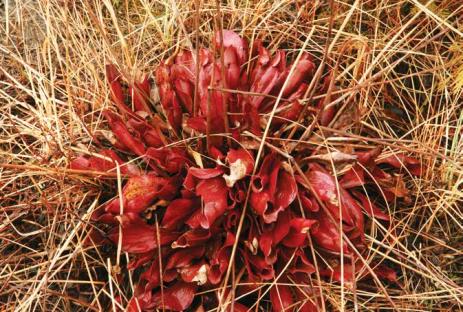