Soil for Rock Gardens and Troughs

Rich vs. Lean Soil for Alpines 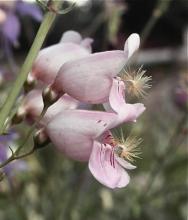 Nearly all alpines need lean soil. But what exactly does that mean? Like many things in life, and in the language of soils, lean is the opposite of rich. If you are a cook, it will be easy to relate: rich food has lots of fat. Lean food contains very little fat. If you like fixing cars, then you are familiar with gas/air mixtures. A rich mixture has lots of gas. A lean mixture has very little gas. So, a rich soil is fortified with an abundance of nutrients, while a lean soil contains very little plant food. Okay then, why do alpines need lean soil? The answer lies in their native high mountain habitats.

I once had two Penstemon palmeri plants of the same age. I put one in rich, but well drained soil, and the other in dry, lean soil. The one in dry, lean soil grew vertically, as it should, and blooms well. It still grows in my garden. The one planted in rich soil grew much faster, but stems were prostrate and nearly parallel with the soil surface. There was no sign of bloom, and it did not even survive the following winter. As it happens, this is a textbook example of dry land species Penstemons growing in rich soil. The same symptoms will also occur with our Minnesota native Penstemon grandiflorus, and many other Penstemon species.Many of the plants that we seek to grow come from alpine areas where the soil is composed almost exclusively of rock. These soils contain lots of minerals, but major nutrients like nitrogen, phosphorus and potassium are scarce. For the most part, it is organic matter that provides these nutrients, and in most alpine soils organic matter comprises only a small part of the soil mass. Over the millennia, alpine plants adapted quite well to these seemingly hostile soils, and that’s where they do best. The bottom line is, if you want to grow plants that look like they do in the wild, you need to at least try to mimic wild conditions, which includes the soil type. And what if you don’t? Depending on the plant, it could mean death, or it might just mean growing “weird.” 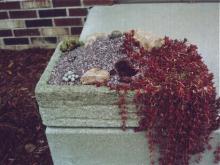 Another good example is Delosperma nubigenum. This hardy ice plant took over my trough, due to rich soil. (See the photo at right.)

The mix was already lean, but obviously not lean enough. This was the year that Ian Young, a bulb and alpine plant expert from Scotland, came to present a talk for our Minnesota Chapter. He stayed with me while he visited here, and of course, saw the trough.

Ian immediately knew it was a new planting that season (with fresh, unused nutrients in new soil). When I complained that the soil was already lean, he remarked, “Next year it will settle down.” Well, it did, but still not as much as I had hoped, and the number of flowers produced still isn’t as it should be. Since then I have learned to make soil mixes that are even leaner. After all, you can always add fertilizer, but you can’t take the nutrients out of the mix with too much organic matter.

These are just a couple of examples of what can happen when our mountain gems are planted in soil that is too rich. In general, you will find that in a well-fortified soil, alpines will grow larger, more floppy, bloom less (or not at all), have weak stems, and be less winter (and summer) hardy.

Mountain alpines naturally get a tiny jolt of nutrients with the spring snowmelt. If you think your plants need some nutrients, this is the best time to add them. Perhaps the only other time that extra fertilizer might be advantageous for alpines is at seedling stage. With the added nutrients, many growers find faster establishment when seedlings are vulnerable, and a better overall start in life. But a rich life cannot go on forever, and these same growers will then wean off the fertilizer to produce the normal characteristics that we all love so much.