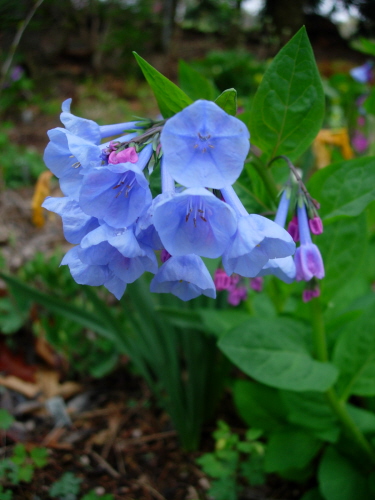 The genus Mertensia is named in honour of Francis Karl Mertens (1764-1831), a professor of botany in Bremen, Germany. There are about 50 species found throughout the north temperate regions of the world (18 from North America). All are herbaceous perennials. They are relatively small to mid-sized plants; the largest reaches about 100 cm or 3 feet in height. Habitat varies considerably from high alpine regions of the Rockies, Alps and Himalayas, to moist woodlands and stream sides and even along sandy beaches that extend well into the Arctic. Such a diversity in habitats translates into variable cultural needs and hardiness. The specifics will be revealed shortly!

The genus itself is fairly easy to recognize by its flowers. The dominant colour is blue, from pale to dark violet-blue, depending on the species. Some change colour from pink to blue as they age in a similar fashion to those of their close relative, the lungwort, Pulmonaria. Like lungwort, their flowers are produced in nodding clusters and are typically bell-shaped. As a group, they are spring or early-summer bloomers. 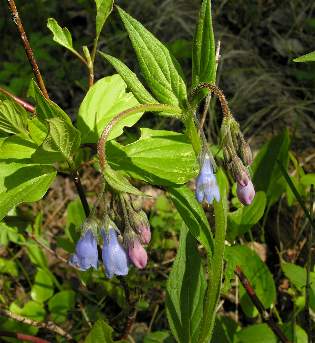 Culturally they fall into three main groups. First I’ll start with the woodlanders. Among the popular woodland species, most hail from North America. These are commonly encountered in moist, dappled woods and if exposed to summer drought, will go summer-dormant. In the garden, provide them with at least part shade (especially from hot afternoon sun) and provide neutral to slightly acidic, organic-rich, evenly moist (not soggy) soil.

Probably the most popular woodland species is the Virginia bluebells, M. virginica, which hails from the eastern USA. The northern or tall bluebell, M. paniculata, appears quite similar but is distributed further north across Canada and the northernmost States. The Asian counterpart is the Siberian bluebell, M. siberica. These species will reach 60-90 cm (2-3 feet). They are hardy to zone 3 and are the easiest Mertensia to cultivate in the garden. 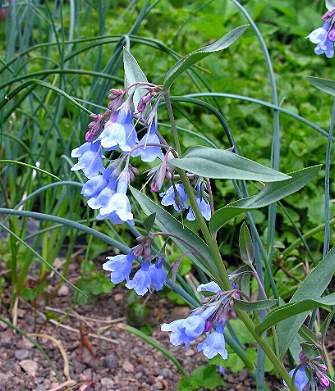 Several species do grow in open sunny areas among the prairies of North America. TheseMertensia often have glaucous foliage that is thicker in texture than the woodland types. This allows them to better cope with the drier conditions encountered in their native haunts. In the garden, these do require very well-drained soil and are often more challenging to grow outside of their natural distributional range since they dislike excess winter-wet. They will tolerate (and often prefer) more alkaline soils. Typically, the flowers are deeper blue than the woodlanders and more densely clustered on lower stature plants (generally around 30 cm or 1 foot). Foremost among these species is the small bluebells, M. longifolia from western North America, the prairie bluebell, M. lanceolata, from central North America and the leafy bluebell, M. oblongifolia, from western and central North America. All are hardy to zone 3-4 and are lovely additions to a rock garden setting. 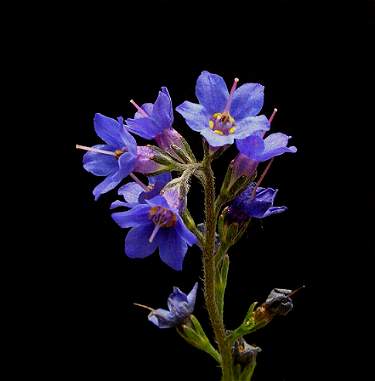 The third group are the alpine species. These are true rock garden gems with rich, deep blue flowers on low plants under 30 cm or 12 inches. Despite being alpines, they are not as hardy as the previous species, mostly being rated for zone 5. They are the most difficult group to grow as they need cool sites with well-drained yet moist soil. Excellent drainage is especially required during the winter months. These species are often featured in alpine houses throughout Europe. There is one notable species from North America called M. alpina. Two other species that may be encountered in specialty alpine nurseries are M. echioides from Kashmir and M. primuloides from Tibet.

A couple of Mertensia don’t fit clearly into any of the above groups. The mountain or tall fringed bluebell,M. ciliata, is a native of the western US. This species is among the tallest (to 120 cm or 4 feet) but oftentimes can be quite dwarf. They often grow in full sun and have blue-tinted leaves like the prairie species but they require an evenly moist site. In the wild, they usually grow along mountain streams and wet meadows among the foothills to subalpine zones. While hardy to zone 4, their particular cultural needs are not easy to duplicate in the garden. 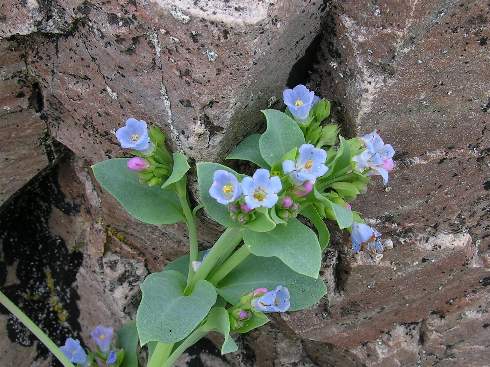 The last Mertensia worthy of mention is the seaside lungwort or oysterleaf, M. maritima. This species inhabits a very specific niche. It is found along rocky to sandy coastal shorelines throughout the northern hemisphere. It is the hardiest species, surviving easily in zone 2. The foliage is perhaps the most spectacular of all the Mertensia, being quite broad and distinctly blue-grey. Non-flowering plants produce a low rosette of leaves but upon blooming, trailing stems may reach 100 cm, ending in clusters of flowers that change from pink to light blue as they age. Oysterleaf blooms from early summer through fall, making it the longest blooming of any Mertensia. Alas, they require poor, well-drained but moist soil and are intolerant of any excess heat. They are naturally adapted to salty conditions, often growing at the high-tide mark. In cultivation, they even seem to benefit from the application of salty water! As an ornamental, they may be attempted in cooler, coastal gardens. The common name ‘oysterleaf’ comes from the fact that the leaves taste like raw oysters.

If you like blue flowers and are willing to go that extra mile, then the genus Mertensiaare well worth growing. Certainly, the woodland species are easily amenable for most gardeners but the prairie and alpine species are not without their challenges.