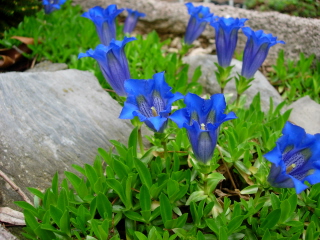 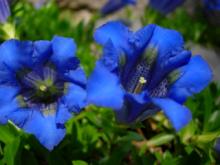 For many rock gardeners, gentians are the epitome of rock garden plants. Many are compact alpine plants and most have gorgeous blue flowers. There are gentians which bloom in the spring like G. acaulis and G. verna, while G. septemfida blooms in the late summer or early autumn and there are gorgeous autumn-blooming Gentians such as G. farreri. 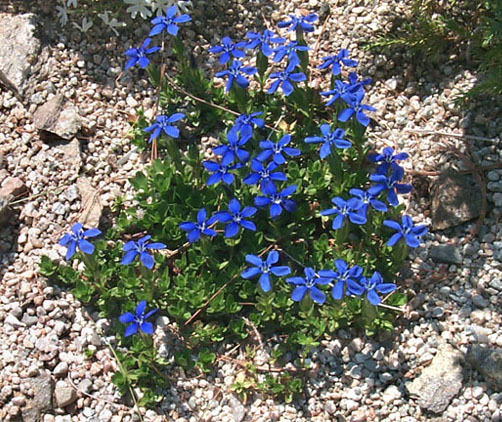 The true gentians in the genus Gentiana all have pleated connections between the corolla lobes called plicae. The plicae are blue and blend in to the blue corolla lobes in G. acaulis but they are larger and more prominent in many other species and forms like the G. paradoxa hybrid shown below. The biennial four-petaled "gentians" have been segregated into the genus Gentianopsis (see Gentianopsis crinita below). The petals may be fringed but they don't have plicae. Another closely related genus isGentianella whose members usually have smaller less conspicuous flowers. Both Gentianopsis andGentianella species are commonly also called "gentians". 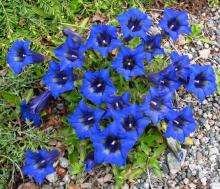 Gentiana acaulis and the very similar G. angustifolia, G. dinarca, among others, hail from the mountains of Europe. Just as the mountains ranges are different, so are the preferences of each in the garden. 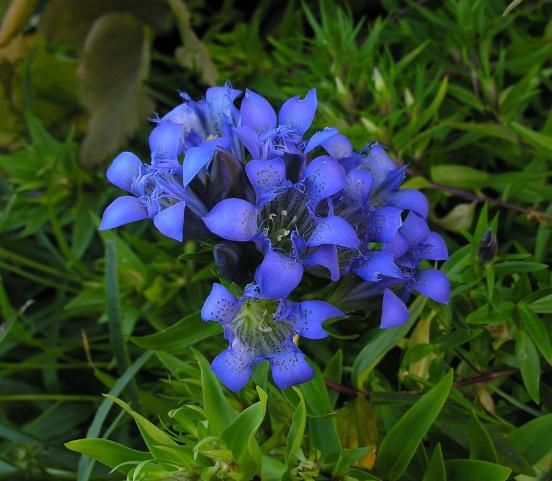 Gentiana verna is another wonderful species for the rock garden which is also from the mountains of Europe.

The summer blooming G. septemfida, G. paradoxa and their hybrids are wonderful plants but grow a little bit taller. Autumn gentians from eastern Asia are glorious but difficult to grow in warmer climates. Most are from the Himalayas and like a cool monsoon climate at high elevation. Gentiana farrerri, named for Reginald Farrer, is one of these. Some garden hybrids are easier to grow but they too may be short-lived in climates with warm summer nights. 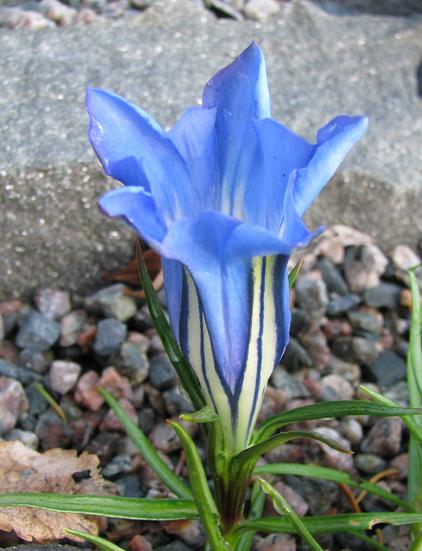 Some gentians are interesting and pretty but not very showy, although they are easy to grow in the garden, such as G. dahurica. This species or similar ones are occasionally submitted to the seed exchange erroneously for G. septemfida or other more desirable species. The flowers are only about a centimeter across (about 1/2 in.) At left, Gentiana paradoxa hybrid with six corolla lobes. Sometimes this happens but it is not consistent from flower-to-flower or year-to-year. (Photo by Mike Slater.)

There are some species which are nice in a meadow garden or along a woodland edge such as G. lutea and G. andrewsii. These autumn-blooming "Bottle" gentians have flowers which never open any more than this. Bumble bees just push their way in in order to get nectar and pollinate the flowers. Gentianopsis crinita is the gorgeous "fringed Gentian of eastern North America. It is a biennial and prefers to grow in slightly disturbed damp meadows which are neutral or slightly alkaline in pH. It is considered difficult to grow in the garden.