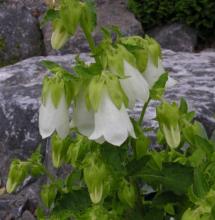 The status of genera within the family Campanulaceae will undoubtedly be in a state of flux and controversy for the foreseeable future as modern scientific methods expose genetic relationships among taxa which up to now have been grouped by botanists based solely on visible morphological characteristics. (Here is an interesting article about how decisions on botanical reclassification are being made: http://www.rhs.org.uk/Learning/Research/APONAT1.htm.) But for the time being the old names and their claims to generic status - or at least most of them - are still valid, and so they can still be listed as members of the family Campanulaceae.

Lobelia - We should get this one out of the way first. Lobelia has always been the odd-man-out in Campanulaceae, being the only member of the family not to have regular flowers but instead generally tubes with the openings being divided into lips, usually grouped two and three. It is highly variable, from small annuals to giant hairy perennial African species that look from a distance like saguaro cactus. Lobelia is probably the base form from which many other lobelioid genera are derived; it is therefore highly paraphyletic and not a good genus. Many general sources (such as encyclopedias) merely say it is "not recognized in all classification systems", and even the Angiosperm Phylogeny Group report of 2003 sidestepped the issue by listing it under both Campanulaceae and Lobeliaceae. Some botanists make the half-step of placing it in sub-family Lobelioideae under Campanulaceae.

Many sources make a point of saying that the genus as a whole has not been studied sufficiently to make a determination. As no member - as currently recognized - is usually considered to be a rock garden plant, perhaps we should just be patient and concentrate on those genera that are. 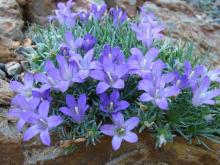 Symphyandra - This is a relatively small genus of about 14 species which is separated botanically from Campanula only by the anthers, which instead of being free are joined in a tube that surrounds the style. This characteristic, common to other campanulas but only at an early stage, is considered by some not to be sufficient cause for generic separation. An RHS Advisory Panel has already recommended merging it withCampanula.

Symphyandras range from eastern Europe to Korea, flowers are campanulate, often elongated, usually nodding, and purple or white. Typically a basal rosette gives rise to ascending or decumbent stems of 30-60 cm, on the large side for the rock garden. While some are perennial, in practice many act as self-seeding annuals, and others are biennials and even monocarps.

S. hofmannii, pictured, is found in rocky places in countries of the former Yugoslavia. A short-lived biennial, it is 30-60 cm tall, with creamy-white flowers to 3 cm long.

Edraianthus – A small genus of low-growing plants found from the Balkans to the Causacus.

The campanulate blue-violet or occasionally white flowers are usually held in clusters, sometimes held aloft or at the end of splayed stems, as in E. dalmaticus,graminifolius, parnassicus, serbicus andtenuifolius, or virtually obscuring the foliage in a mat of true or almost stemless flowers as in pumilio or serpyllifolius. They prefer full sun and well-drained soil. 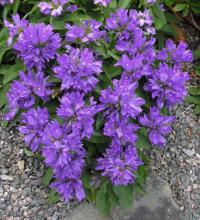 The genus Campanula is the largest in the family Campanulaceae. That is where agreed-upon "fact" ends and controversy begins. For almost 200 years botanists have tried to organize the genera of Campanulaceae and the species of Campanula using the morphological characteristics they could observe. Flower shape, calyx appendages, fused anthers, seeds shed by pores or valves, these were things they could see, compare and contrast, and it's only relatively recently that the ideas of convergent or divergent evolution could be taken into account to help explain them. With current science using genetic information to revolutionize our ability to track phylogenetic relationships among plants, everything has changed; how dramatically remains to be seen in regards to the Campanulaceae.

Lobelia, perhaps the most divergent genus formerly grouped in the family, is now either a sub-family within Campanulaceae or a family of its own as Lobeliaceae; a final decision hasn't been made.

A few outliers, Wahlenbergia, Platycodon, perhaps Jasione, seem to be secure in maintaining their generic status and probably won't be merged elsewhere, while, on the other hand, to some, Symphyandra is already considered to be an artificial genus because it was defined only on the basis of its fused anthers, a characteristic present in the flowers of all other Campanula species as well, but only when they are young.

But what about the eighteen-or-so other genera which have traditionally been included in Campanulaceae? The latest studies are showing that in all probability the genus Campanula is not monophyletic, that is, does not have one common ancestor. This explains the great difficulty and confusion experienced by the botanists who have tried to make sense of the variation in species; they were not working with one line of descent or distribution, and morphological characteristics such as flower shape or seed capsule dehiscion had arisen in parallel.

It has been observed that rotate (wide open) flowers in Campanulaceae are pollinated by more varied species of insects, and so strong selective pressures from pollinators could have lead to floral shape convergence, resulting in DNA incongruence between species.

Results from one recent study1 divided the Campanulaceae into several groupings. Group A (we'll call it) consisted of Muschia, Gadellia, Campanula peregrina and C. primulifolia. 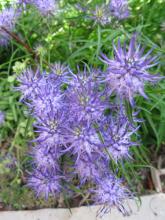 Group B2, "Campanula s. str.", consisted of Azorina, Michauxia, Edraianthus, Diosphaera, and most of what we think of today as Campanula species. Group C were the outliers, the most different: Wahlenbergia, Jasione, Platycodon, Feeria, and Roella.

The writers of the study recommended that members of Group C should retain their generic rank but that - gradually and subject to further scientific study - the plants in Groups A, B1 and B2 should all be absorbed into the genus Campanula! Whether the scientific community will accept a polyphyletic genus is debatable, and Campanula already has 300-500 species as it is.

Another study2 used seedling morphology as a guide for classification, with two major group evident.
Group 1 (Campanumoea, Canarina, Codonopsis, Leptocodon, Ostrowskia, Platycodon and Cyananthus) share elongated seedlings with spaced internodes and opposite leaves, among other attributes. Almost all taxa are diploid, with 2n=14,16,18.

It should be noted that this study's sampling was limited, and included a disproportionate number of species from the regions of the former Soviet Union, so some more or less common genera are missing from the classification.

The so-called Himalayan group is a bit of a misnomer, including as it does species from Afghanistan to Yunnan, but if its members cannot claim a geographical commonality they do at least share one attribute, and that is an almost universal lack of appreciation by botanists and horticulturalists. Crook says of them, "They are annuals, or at least very short lived perennials, generally lax and weedy in habit and with flowers that are not distinguished either in size or colour." Nicholls describes some with faint praise ("more interesting than spectacular", eg) while frequently reminding about the groups' tendency to rot in winter wet (hairiness of stem, leaf, or flower to some degree is common throughout the group) but he does give potting and pruning instructions for preparing cashmeriana for the show bench, so he, at least, sees redeemable qualities in the group.

And he's not alone. Lewis & Lynch in "Campanulas" are enthusiastic about cashmeriana. "C. cashmeriana is a small wiry deciduous campanula which springs each year from a woody rootstock thrust by choice deep into a narrow rock crevice." They describe the grey-blue flower as "a solitary pendant bell of aristocratic shape." "To this must be added that the flowering period is as long as that of any campanula in cultivation...," from July to frost, and it will self-sow, especially in sand.

Other members of the group: argyrotricha, short-lived but will self-sow, for the alpine house, "a minor version of cashmeriana"; cana - from India and W. China, grows in crevices, large solitary purple-blue broadly infundibular flowers, grow as an annual in the alpine house; alsinoides - wiry stems to 10 cm, treat as annual; pallida - reported to be biennial, ssp. tibetica as perennial, colorata as obsolete syn., found in India and perhaps further east and west, occasionally in seedlists, seldom commercially, used in herbal medicine, photograph here:
http://www.flowersofindia.net/catalog/slides/Pale%20Bellflower.html. 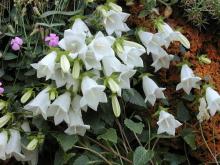 In Campanulas, the betulifolia group consists of the species betulifolia, trogerae,choruhensis, seraglio, and kirpicznikovii. All have been described relatively recently,betulifolia by the middle of the last century, and choruhensis only in 1993. They come from the the region between the Black and Caspian Seas in the Caucasus Mountains and further south into eastern Turkey, occupying cracks and crevices in limestone or volcanic rock. 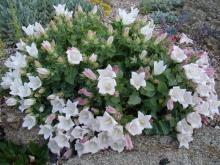 In general, the plants form tufts of more-or-less birch-like leaves from which they send decumbent or ascending stems about 10-20 cm long, which are brittle in some species. They flower in spring to early summer and go dormant in fall, looking brown and dead in the open but retaining some green in the greenhouse. All are recommended for raised beds, troughs or walls, and they do well in crevices or pots, as their branches, whether they start out lax or ascending, tend to sag under the weight of the flowers. They prefer a limy to neutral soil, generally well-drained. All need their seed to go through a cold period (stratification) and exposure to light to germinate, so seed should be sown on the surface of the growing medium. 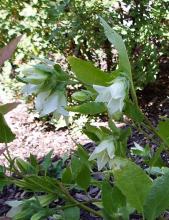 Betulifolia has the widest range of the group, from the Caucasus down through Armenia into Turkey. It likes sun and a drier crevice or scree than some of the others, and perhaps a bit more alkaline. It has pale pink or white tubular-campanulate flowers, but buds that are described as wine red, (although the plant in the photo above does not show this). 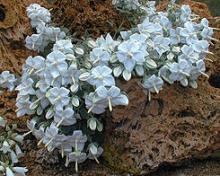 Choruhensis is from Turkey, where Nicholls reports it likes cool northern exposures, and another source recommends a gravelly humus soil with a pH tending towards neutral. The bud is ribbed, rose pink (shown well in this photo; be sure to click on it to enlarge it), and the goblet-shaped flower is ivory with a hint of pink, or in some forms a strong pink.

Kirpicznikovii is the northernmost member of the group, from the Russian/Georgian Caucasus, and is the only one not to have pink tendencies. It occupies sunny limestone crevices and has yellowish buds and large creamy flowers. 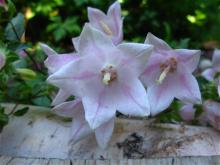 Seraglio, also from Turkey, sounds from the published description to be very similar to trogerae, a wide-open, stellate bloom. It might prefer more sun and a leaner soil. Its name, it seems likely, is a corruption of the place-name Sarigol in Turkey where it's found, rather than a reference to seraglio as a Turkish harem or palace.

Also available commercially is a hybrid between betulifolia and trogerae which is reported to be easier than either. In 1990 this cross was made and a selected seedling was named "Edward Forrest". Clones of this hybrid are still sold, however several nurseries have made their own crosses and are marketing the results simply as "betulifolia xtrogerae".