Hello, it's me Mark McDonough, logged in as a standard user, to do some more forum testing, this topic primarily for Moderators and Admins to sort some issues out.  This topic will be used to verify or validate some features in terms of the forum's Search feature.  I will be uploading some images, not so much to show them, but to test what text the forum is using within its search function. 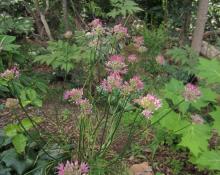 Mouse over this photo, you should see the plant name.

Mouse over this version, and you might only see a portion of the caption, I believe is certain characters are used in the caption, then depending on your browser used, it may interpret the character with some sort of formatting action. In this version or the caption ("Title Text") I used a colon " : ", and only what comes after the color will display on mouse-over action.

Issue #1:  Caption Text
The use of certain characters in "Title Text" when uploading photos, such as colon " : " and hyphen with spaces " - " causes the popup caption text to become truncated, only showing the part that follows that character.  Mousing over the two photos above in the following browser versions confirms the bug:

Actually several aspects of the NARGS Forum can be tested here; the behavior of caption text, the difference between "Title Text" and "Alternate Text" when uploading photos (both as attached photos or in-line embedded photos), display issues with photo captions.

But of course the primary goal here is to discover whether what I'm calling "caption text" is searchable on NARGS Forum. My belief is, doing some testing today, "Title Text" used to add a popup caption to photos, is not considered for searching.  For that reason, forumists should not rely solely on that feature to supply plant names, they should still add plant names to the body of their message, so that they are searchable.

It appears that there is a certain delay period before new posts will be "indexed" so that their contents are searchable.

Daniel:  do you know what the indexing increment is?  Is it once per day, if so, at what time?

Note: Approx 2-1/2 hrs later from adding some random unique words to my post above, they are now found on a Forum Search.  The words were added around 7:15 PM and searched for again at close to 9:45 PM.

I believe I have confirmed,

I believe I have confirmed, that the optional text that can be entered when uploading images ("Title Text" and "Alternate Text") are not being used by the NARGS Forum SEARCH function.

Why is this important?  Some forumists depend on the "Title Text" feature when uploading images, that provides a pop-up caption when "mousing over" a photo, to supply the caption or plant name. However the "caption text" is currently not being searched by the forum SEARCH function.  So the best practice is to always supply plant identification information about your photos in the body of your posts, and NOT depend on captions.  Please still use the caption functionality, its very useful for people viewing your posts, but also add plant names of your photos to the body of text in your messages for purposes of searchability.

This can be tested by searching on the words shown in the screen capture for "Title Text" and "Alternate Text"; currently none of the random words will be found by the Search function.

Issue #2: optional Title Text and Alternate Text is not currently being searched by the Forum SEARCH functionality.

Status:  Pending
Maybe there is a way to add the "caption text" to the Forum's SEARCH functionality.  Daniel, what do you think?