The World of Crocuses - by Jānis Rukšāns

everything Janis has learned about Crocus over  the last decades.

Jānis Rukšāns, author and grower, is a world renowned expert on hardy bulbs and no stranger to readers of the IRG or members of SRGC or any of the other horticultural organisations to whom he has delivered lectures over many years.
Born in Latvia on 5th September 1946, Jānis has to celebrated his 70th birthday. His interest in gardening started when he was 12. From 1961 to 1966 he studied in gardening college. His diploma work was about alternative products of bees - and nowadays he has 15 bee hives! In 1973 his graduation work from the Latvian Agricultural University was “The Use of Wild Tulip Species in Tulip Breeding”. Later he worked in the National Botanical Garden of Latvia as assistant in the Laboratory of Plant Systematic and Seed Exchange, where he worked on the project “Dendroflora Baltici”. From 1972 he worked at the National Gardening Magazine, at first as editor, but since 1977 as editor in chief. At the end of the nineteen-eighties he was one of leaders of the independence movement which resulted in restoring the Latvian Republic after 50 years of occupation. Since 1991 he headed his own nursery of rare and unusual bulbs, retiring only last year.
In 1976 his first book was published, with a second edition in 1978. The total number sold reached 100,000 copies and this book was also translated to Lithuanian. In 1981 he wrote the monograph “Crocuses” (in Latvian), where most of crocus cultivars grown at that time are described. In 1979 he was the editor of “Daffodils”, where he wrote sections about growing, breeding, cultivars and plant protection. From 2001 till 2010 he continued to publish; he wrote a new book about daffodils and two books about small bulbs (all in Latvian).

His first book in English, “Buried Treasures” was edited in the USA in 2007.  Now in its 2nd edition, it was nominated as one of the 10 best publications by Members of the Latvian Academy of Science in 2007. Australian Gardening Magazine wrote: “Up to now there were two books “needed” for each gardener’s bookshelf, now we have the third - Buried Treasures”.
In December, 2010 Timber Press edited a new book by Jānis: “Crocuses, A complete Guide to the Genus” – this is a popular book for every gardener where Jānis partly followed the style of the famous E. A. Bowles “Handbook”. He has written many hundreds of articles for gardening periodicals in Latvian, Russian, and English. Every year he lectures in many countries - UK, Sweden, Holland, USA, Canada etc.

He organized his first expedition to Soviet Central Asia in 1975 and since then he has gone almost every year to the mountain districts of former USSR from W. Ukraine to Vladivostok in Far East. In 1982 he discovered new Corydalis species in Tajikistan which later was named in his honour as Corydalis ruksansii by Swedish botanists from Gothenburg Botanical Garden. In 2002 he took part in the first expedition to Turkey organized by Gothenburg B.G. and to date has been going there several times a year. During those expeditions he discovered many new species of bulbous plants. In 2008 he made a month-long trip through the mountains of Iran (resulting in finding some 6 new species, four of them later published) and again visited Iran in 2016, when at least 2 new species of bulbous plants were found.

Since the 1960s he has worked on bulb breeding. His first tulip variety ‘Lord’s Supper’ was internationally registered in 1982 – at that time it was the only variety from “behind Iron Curtain” to be internationally registered. In 2002 his Tulipa hybrid ‘Girlfriend’ won a diploma in the world exhibition Floriade in Holland. He started a new style of breeding using as one of parents Tulipa vvedenskyi. He raised hundreds of Daffodil cultivars, amongst them the first white multi-flowering split-corona Narcissus ‘Freedom Stars’ (AM 2004, AGM 2007) and some uncommon colour combinations which were most unusual at the time.

Jānis’ greatest successes came in breeding small bulbs. He raised more than half of all known Corydalis cultivars and now his collection of Corydalis, many of unique colour combinations, is one of the largest in the world. He has raised many new Crocus cultivars several of which are unique, and described more than 30 new Crocus species from Turkey, Iran, Greece and Portugal. At present his Crocus collection exceeds 1500 samples and is the largest in the world but in total his collection of bulbous plants exceeds 5500 samples, all grown by him in his garden.

In 2005 he was awarded an honorary degree of Doctor of Biology from the Latvian Academy of Sciences (Latvijas Zinātņu akadēmija) for his work with plant exploration, introduction of new species to cultivation and plant breeding. He has also received outstanding honours such as the “Three Star Order”, the “Cross of Recognition” and “Prime Minister’s Award” from the Latvian State.

Now Jānis has finished work on the manuscript of a new crocus book - The World of Crocuses. It is a résumé of his 50 years of work with Crocus, his researches on them in the wild and in the garden and it will be dedicated to the 100th Anniversary of Latvian State, which will be celebrated in 2018.
The new book  includes chapters with general information and cultivation of crocuses, their morphology and keys for all species recognised at the moment of completion of the manuscript. The greatest part is dedicated to detailed information of the (in excess of) 230 known species of crocuses with details about their requirements in cultivation according to Jānis’ experience. Almost all species (with very, very few exceptions) are supplied with distribution maps, richly illustrated with pictures from wild and cultivation.

This new book will be more than 500 pages long and will include more than 1500 colour pictures. The species are arranged in alphabetical order, making it easy to find them without special searching by Index.

The SRGC is proud to have supported the publication of this excellent reference book.

It can be ordered from  Jānis Rukšāns by emailing him for details of cost and postage etc at   janis.bulb@hawk.lv

I commend it to you, 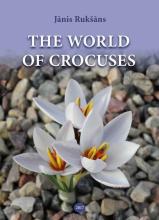 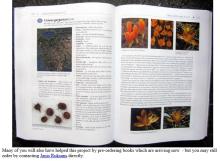