Very interesting, Rick. I had no idea of the flora of Minnesota. Have always thought of it as a state of huge areas of farmland.

Trond, it is the states to the south of me that a predominantly farmland, but even they have their interesting parts.  Nearly all of the prairie land in Minnesota is farmed.  As you can see in the attached Minnesota pdf file, Minnesota has 3 basic ecotypes, the prairie grasslands (yellow), the deciduous woods (green) and the coniferous forests (blue-gray).  The map is of pre settlement time, meaning what was before Europeans came (before year 1800).  I live 25 miles east of what shows as the prairie/deciduous woods border, but really, I am right at the edge of farm country, because of the clearing of the woods for agriculture.

Western Minnesota is prairie land, and topographically speaking, quite boring.  We in the Midwest U.S. can get excited at the smallest things, as mountains, picturesque lakes or oceans, etc. are just not outside our back doors.

Well, mountains aren't the only thing... I love me a good grassland, too!
If you visit again in spring/summer, it will be interesting to see what other specialties are there.

I never realized you had 'desert' in Minnesota...those pics look like they could have been taken in Drumheller or Milk River area of Alberta.

I never realized you had 'desert' in Minnesota...those pics look like they could have been taken in Drumheller or Milk River area of Alberta.

Remember too, that this is late fall.  Things would be a lot greener in summer.  Gneiss Outcrops and Blue Devil Valley SNAs border the Minnesota River, and there is a natural pond (most people would call it a lake) not far from Yellow Bank Hills SNA that you can see in the photo.  However, Minnesota does have Weaver Dunes SNA, that contains active blowouts. 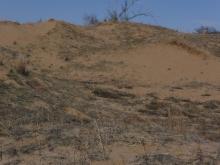 Rick, a "blowout" is where the sand blows away?
We have deserts in Norway too. Some places the precipitation is less than 200mm (8inches) a year.
http://www.nrk.no/nett-tv/indeks/146755/

Yes, a blowout is where the sand blows away.  It may shift to another location or just disperse and "disappear."

I once found a Lupinus sp. (either the white or cream flowered species) in one of these areas.  It was clear that the crown was not near the surface as it normally would be.  I dug in the sand for about 12 inches  (31cm) down and never found where the root structure started.  It was buried by the shifting sand.

I have to say, though, that this is an extremely rare phenomenon in Minnesota.  Most dunes in Minnesota have been stabilized for centuries.

Some interesting species there, Rick, good to see!
Where I live is basically all farmland, but that does not mean all the land is cleared --a lot of it is used for grazing, and the cattle are simply turned out into the natural vegetation--wetlands, woods etc, and depending on how heavy the grazing is, there are still many native plants..

Nice that these areas have been consciously preserved, even in small chunks..

In late June I took a day trip to western Minnesota near the border of South Dakota. Specifically, I wanted to explore Clinton Prairie Scientific and Natural Area, as it hosts Lilium philadelphicum (Wood Lily), one of Minnesota's native lilies.

I arrived on a very humid and sunny, 95F day that was fiercely windy.  Terrible for photographing, but I think I would have melted were it not for the constant rush of fresh air.

Prairies are not exactly cornucopias of beauty for most people.  In fact I am continually warning the uninitiated who want to grow a mix of wildflowers in their gardens: wildflowers tend to look like weeds until they flower.  Add to that the "boring" grasses that dominate prairies, and well, you get the idea.

Clinton Prairie is 160 acres of undisturbed soils, but was managed as a hay meadow in the past.  It is a shallowly rolling ground moraine of mesic to wet prairie bioms, with several small depressions just barely wet enough to support species such as Narrowleaf cattails (Typha angustifolia) and Arrowhead (Sagittaria sp.).

Leadplant (Amorpha canescens) is common in prairies throughout Minnesota. Typical growth seems herbaceous to the untrained eye, but in one part of the prairie, they grew taller than I have ever seen in the state (third photo). 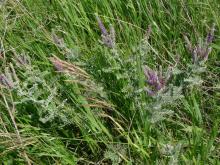 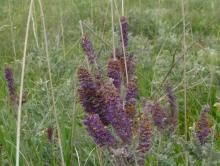 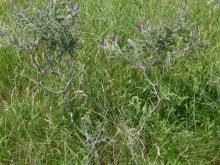 Canada Anemone (Anemone canadensis) can be a thug in gardens, but here it has its niche, growing well in certain more moist parts, but absent in most of the prairie. 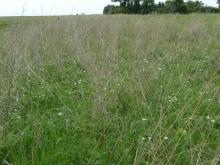 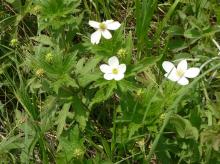 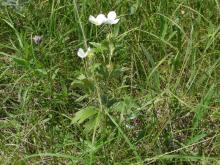 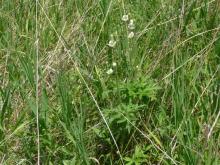 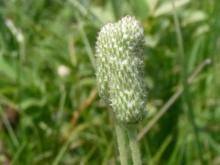 Prairie Dogbane (Apocrynum sibiricum) looks almost like it could be an Asclepias sp., but the inflorescence structure is not umbellate. 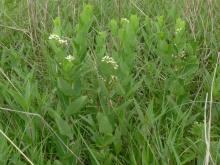 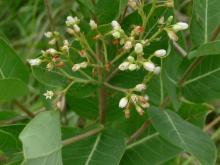 Still at Clinton Prairie.
Prairie clover grows to handsome clumps in the garden, but is usually just one to several stems in the wild.  I did not find Purple Prairie clover here, but
White Prairie clover (Dalea candida) was common. 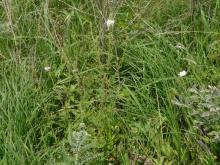 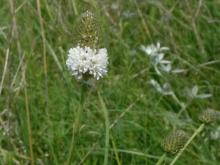 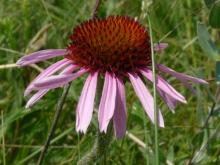 Not to be confused with Giant hyssop which has a licorice smell, this is Wild Licorice (Glycyrrhiza lepidota). 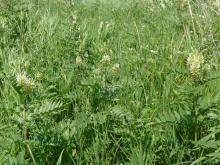 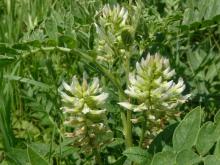 Sweetclovers are terribly invasive species in prairies, and can easily grow six feet or more.  Here, Yellow sweetclover (Melilotis officinalis).  Yellow and White sweetcolvers are biennial.  The dead "brush" you see in the background in this pic (more prominent in other photos) is sweetclover.  Not thinking about this segment of a forum post, I had avoided photographing the large and typically unsightly dead material.  In parts of the prairie, it was so thick that it was difficult to walk through. 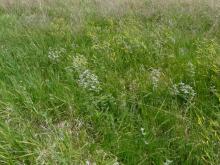 Maximilian Sunflower (Helianthus maximiliani) is our latest blooming native sunflower.  Every year one wonders if there will be time enough for it to bloom and seed, but it always does.
Second pic: Common milkweed (Asclepias syriaca). 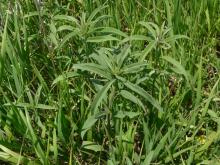 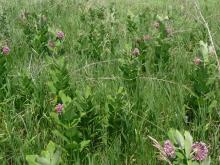