Trond, That's a lot of snow- pretty impressive infrastructure that they can even keep those roads open! No denying our winter is long, and we can have deep cold, but we are set up to handle that cold, so really, our winter is usually pretty trouble free-it's rare that it even takes more than a few extra minutes on the drive to work here after or during a snowstorm! I think somewhat warmer and wetter places seem to have much more turbulent and troublesome winters: ice storms, huge wet snow dumps etc-- tornadoes again in the southern U.S.!

I think you're right, Cohan.  I'm not liking this zone 5 weather we've been getting the past few years.  We never used to have ice storms or humid spells in winter.

I hope they don't move any farther north....

We get the swings, but just not as much moisture, generally... We've had some rain forecast several times this winter, but never got anything noticeable out of it.. Today had been forecast for rain as well, then they took it away, now for Rocky, west of us they say again possible rain showers this evening then 5-10cm of snow overnight.. for Red Deer, east of us, there is no rain, just possible 5 cm of snow... We could get anything between those two possibilities..Yesterday's high was around +10C and Tuesday's high is -8...

It swings here too! It started in November and since then the temperature has oscillated in a regular manner but with much colder weather than normally here. The mean temperature for this winter is far lower than normal.This is from the closest weather station for the last two months:

We were mostly below average, but without the coldest temps we expect to have some of, from end of Oct until late Dec, and since then mostly above average with a few short colder spells.. still no -30 which is quite surprising! Luckily we did not get the rain yesterday, just another 5-8 cm of snow... They also took away the forecast for -8C- now our coldest day this is supposed to be -5C, with nights from -9C to -18C

Winter isn't done with us yet- not that I thought for a moment that it was- we've had snow on the ground for just under 5 months, this is this week's forecast;fortunately they removed the possible rain from tomorrow's forecast, there is already a lot of ice around from melting snow, we don't need rain to make it smoother: 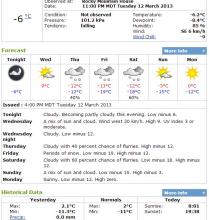 Galanthus in full bloom today in northeast USA, were up 2 inches in early January, then snow covered.  Then about 3/4 grown when last seen about a month ago, now snow mostly gone again yesterday, perhaps for the last time; but we can get snow rarely in May.Winter 2012 was winter-less, approaching zone 6b-7 though plant deaths didn't fit, perhaps because of little snow cover.Fairly consistent trend, here, of higher than normal low temperatures.  Highs have been about normal this season, which is lower than the last several years.Voles and deer doing just fine -- as usual. (sigh!)

I'm wondering about voles here too- they've already had the shelter of snowcover for almost 5 months, and some time to go yet!We didn't get nearly as warm as forecast today, only around/just above the freezing mark, Lori's area was much warmer though..I wish we had some members in Lethbridge, Alberta- seems they've barely had daytimes below the freezing mark this winter- really curious what gardening is like there- more like Denver? or..?

Well, we have barely had daytime temperatures above the freezing mark this winter :-\ The next week is supposed to be sunny and cold - as the last week and the week before that. . . . This will probably last all April too! Some people like it though - the skaters :-X