Here in London, Ontario, it has been dry as a bone since the spring ephemerals went to sleep.  Every morning during my garden tour (the last two months), more devastation met my eye.  Plants which had been pretty impervious to the weather, just shrivelled up and disappeared...and I don't like the look of my 2 ft. high Dawn Redwood just now - after all the wire used to protect it from the rabbits, now this!  Stokesia and some of the gentians look pretty bad.  However, we finally got a decent rain last night and I feel there is lots to learn from this.  Two amazing survivors are the little Ruellia humulus (wild petunia) and the red Ipomopsis rubra.  Some of the droopers have rallied - the Monkey Flower and and Lobelia syphilitica - both native here.  Of course there are water restrictions - no lawn watering - but time consuming to spot water plants in pots and the most severely stressed plants twice a day. Wish I could send pics of all this but, since I had the worm erased and my computer "fixed", Photo Shop has disappeared and I have no way of resizing them.  Maybe Mark can tell me another way to do it? BTW, Mark, it was a very good "onion" season at my place.  Fran

Hi Frances,"A lot to learn" is a good and useful spin to put on drought.  It's funny that you mention Ruellia humilis as a star in a drought situation.  I am not sure what you meant by "little", but in my garden the plant approaches 3ft in diameter.  I would have put it in the category of your droopers, although I agree that it is far more drought tolerant than the droopers you mention.    Perhaps it's just that my wild petunias are surrounded by even more drought resistant plants (?)

A good, simple, user friendly, free, and quickly downloadable photo resizing program (all it can do is resize) is Pixresizer:http://bluefive.pair.com/pixresizer.htm

For a general image editor, I currently use the free Photofiltre.

We're back in Norway again and spending our days at the mountain cabin. Lots of downpour here too and some floodings in lowerlyings areas but none serious so far. The good thing: No plants have died of lack of water this summer!

Hi Frances, your summer sounds like our summer in New England last year, where we literally had only 1 single day in August of any appreciable rainfall, the entire summer in drought conditions the worst in about 50 years.  However, in the following spring, the losses were less than I imagined... I did lose a few treasures, and at least a dozen and a half very expensive Epimediums flat out died from the drought, or were so weakened by the drought that in spring 2011 maybe a sprig or two of life reappeared on well established plants.  I know first-hand just how disheartening it can be to see the garden collapse under great thirst, with watering restrictions in place.

This year we had lost of rain in June, but July has been HOT HOT HOT, reached 102 F (39 C) in Boston (and here) this past week, tying the record for the hottest day recorded in Boston, many other days just a few degrees less hot but still HOT.  The lawn is crisping, and plants are drooping.  We have the usual mandatory ever-other-day watering ban (unlike last year's 100% no-watering-whatsoever ban), so I take advantage of that and use sprinklers to keep the woodlands areas moist.

Glad your allium season is going well, these babies do like the heat and tolerate drought quite well, except for some of the chinese Alliums that appreciate more moisture... lost my 20-year old Allium macranthum from a Ludlow & Sheriff collection in Bhutan :'(; I did send a piece to John Lonsdale a couple years ago, wonder if he still has it growing.

Regarding resizing photos, I hang on to an early version of Paint Shop Pro, and its like second nature for me to quickly edit and resize images with it.  It is now owned by Corel, and is inexpensive.  ACDsee Photo Editor is another good program to use, a relatively low cost product (about $50 US).

.....my computer "fixed", Photo Shop has disappeared and I have no way of resizing them.  Maybe Mark can tell me another way to do it?

Irfanview (FREE to download, and safe to download) comes with a re-sizing tool that is very easy to use. I use nothing else.

It has continued generally rainy and cool here--our share of the heatwave affecting large parts of North America was about 3 days in the mid-20sC last week (one day high 20's) always with cool nights still, and most of those days had one to several heavy downpours from thunderstorms;Edmonton (quite a distance north, but the closest tv news/weather that we get-we don't get Calgary stations, just as far south) had 11 days without rain since the beginning of June, as of a couple of days ago, and we have had at least as many rain days, starting actually in late May.. Friday our high was something like 11C(51F) and there have been lows just above freezing--frost warning last night.. back up to 24Cish today and tomorrow, then cooler again, possibility of rain 5 out of next 7 days....Nothing devastating here though, some areas in the province have declared agricultural disasters due to rain flooding fields, but here its just parts of many fields wet... if we don't get any dry stretches though, crops will be very slow to ripen and it will be impossible to harvest hay etc...Wildflowers generally are loving it, with more bloom on many species, and blooming plants showing in large colonies and or scattered in places I hadn't seen them before--eg--semi/dry coniferous woods have a lot more things flowering in this wet year, and I am seeing huge numbers of Zigadenus elegans in roadsides--which is educational: I think the plants are fairly drought tolerant, based on some locations I have seen them, however, this massive wet year flowering tells me that they truly 'tolerate' drought rather than favour it...(and in fact, its been wet for at least 4 out of the last 5 years-so lots of opportunities for many plants to germinate, as well..

Thanks for the tip, David.  I have downloaded this program and look forward to working with it.Cohan - yes, Zigadenus elegans seems to be pretty tough - not a spectacular flower but ANYTHING flowering in my garden now is doubly welcome.  Quite amazing how the lawn has suddenly gone from gold to green with this sudden rainfall - must be the corn gluten ferilizer??  Fran

Ah, the charms of living near the mountains... getting to a trailhead in 45 minutes is great; the downside is turbulent weather!

Here's the aftermath of a late hail-storm (they occur more usually through July) in the early evening.  It was the biggest hail we have seen in the yard in the last few years, up to about marble-size.  (We have got off lucky... there has been lots of much larger hail elsewhere in the city and environs). 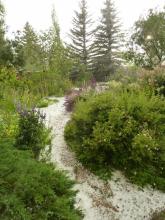 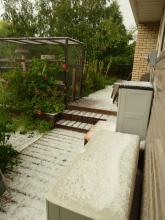 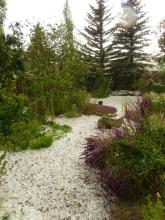 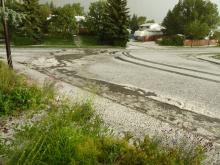 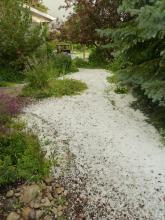 What's really strange about the weather here is that it doesn't even have to be a hot day for hail clouds to develop.  It was actually very cool today, ~15 deg C... and, of course, dropped further to about 4 deg C as the ice came down!

Our yard is pretty hail-proof (all perennials, and resilient) but folks with lots of annuals (and bigger hail) might be hard-hit this late in the season.  Oh well, that's gardening here in "hail-storm alley". 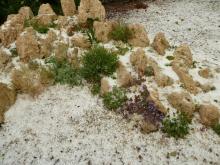 And at about 10:30 this morning, there was still a sheet of ice on the ground - even in the sun in some places!!  Amazing, considering it was 5 deg C overnight and given the warmth of the soil.  :o 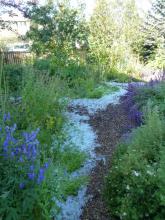 Update:  A local neighborhood weather station recorded a low of 2.9 deg C, +0.1 deg C with windchill... which better explains why there was still ice on the ground in the morning!  :P

Wow Lori, shocking to see frozen stuff on the ground in August! We've had such a long and hot summer, I'm ready for a cooling trend.  Was 88 F (31 C) yesterday, not super hot but hot & humid enough, seems like the daily temps are always in the upper 80s, supposed to be the same high 88 F temperature today with high humidity. I'm looking forward to a night where we don't have every window wide open and a half dozen fans running, and can actually sleep using a sheet or light blanket for cover... I'm so looking forward to autumn.  Until then, I'll just have to look at your plant travels in the high mountains of Alberta. :)