Regarding acidic soil: A plant can grow in a thin layer of acidic peat overlying basic bedrock and the peat can stay acidic as long as the precipitation is greater than the evaporation.

I'm not sure how or whether this point considers the lateral groundwater flow that I mentioned.  (There is very little flat ground in the mountains, a very thin layer of organic materials, and a vast amount of carbonate material for water to flow through and across.) Here is the sort of thing I am wondering about.  Should the tiny lake in the second photo, a couple of hundred meters downslope from the limestone cliffs and moraines in the first photo, have an acidic pH, given the areas of thin turfy substrate between it and the limestone exposures above? 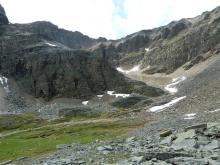 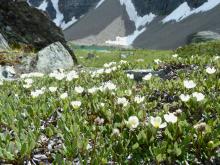 Anyway, a basic point behind my bringing this all up is that even if a plant occurs where the substrate is acidic, it doesn't necessarily mean it requires acidic substrates.   The important factor in alpine areas may be the actual presence of a soil that allows the plant to be able to grow where it does, not that the soil may be acidic.  As James pointed out, T. laxus may occur in acidic substrates in nature but does nicely in alkaline soils here.

Lori, you have to meassure the pH in the soil!

But, as you say, a plant doesn't necessarily require acidic substrate although it grows in it. However, it seems that some plants prefere higher pH or rather more mineral rich soil here in Norway than they do further south in Europe.

Lori, you have to meassure the pH in the soil!

Sure, I'll take distilled water along... but if the plant is growing right next to surface water, I think I'll assume it's probably it's in contact with the same water.

James, you're right that silica is neutral in this sense but don't confuse "rocks" with the mineral, silica.  Rocks are rarely composed of only SiO2.  For example, even an extremely clean sandstone (100% quartz grains) may be cemented with calcite, and flow through it would contribute to making groundwater alkaline and hard.  (And silica is soluble although that's not an overly important point here.)  The basic groundwater cycle is that recharge occurs on topographic highs, seeps down through surface deposits and continues down through bedrock as long as permeability and the pressure gradient allow it to do so.  At the same time, water is also moving laterally downslope along the near-subsurface, also laterally in the subsurface along whatever permeabilty trends exist, and in the direction of decreasing pressure.  Note that the permeability (connected porosity) through these strata can be extremely low; even thick shales, and even those considered to be aquitards, can still allow fluid movement through them - this is occurring on a particle or even molecular scale (water molecules moving through minute pore throats between grains and crystals, or even replacing water molecules bound up in the crystal matrix), not at a rate that is necessarily "observable" by humans or even necessarily in the timeframe of a human lifespan (though it can be measured and calculated by various means). The composition of the bedrock and soil has everything to do with the resulting chemistry of groundwater, as groundwater picks up dissolved minerals from its flow through these materials.

Limestone (rock composed of the mineral, calcite) is actually quite soft in rock terms, but the hardness of a particular mineral has little to do with the porosity and permeability that may exist in rocks composed of that mineral or more commonly of a mix of various minerals.  Almost all rocks have some at least minute measurements of porosity - and permeability - thus allowing fluid flow through them (as above, in the groundwater cycle discussion).  Economically-exploitable hydrocarbon reservoirs, and aquifers, are examples where strata in the subsurface have high enough porosity and permeability that fluids (gas, oil or water) that fill the pore space (or fracture networks, sometimes) can be pumped out at significant rates.  (In other words, it's not coming out of underground lakes or caves, as people sometimes imagine.)

You never answered my question.

How have you come to know so much about geology?

(And silica is soluble although that's not an overly important point here.)

Yes, I should have been more specific and said Silicate ceramics.

Limestone (rock composed of the mineral, calcite) is actually quite soft in rock terms, but the hardness of a particular mineral has little to do with the porosity and permeability that may exist in rocks composed of that mineral or more commonly of a mix of various minerals.

The reason I mentioned hardness is because limestone survives erosion better than many other sedimentary rocks.  This maintains the integrity of the barrier effectively restricting the vertical movement of ground water flow.

I'm a geologist, James.  My most recent role was providing management and geology support to a hydrogeology group within our company - very interesting work.  I guess it's only fair that I ask what you do, James?

The reason I mentioned hardness is because limestone survives erosion better than many other sedimentary rocks.  This maintains the integrity of the barrier effectively restricting the vertical movement of ground water flow.James

No, begging to differ... On the point of "hardness", you seem to be discounting quartzose sedimentary rocks for some reason.  But again, the point isn't the hardness of rocks or their resistance to erosion - it's the porosity and permeability within them.  Your observation that water appears to run over a particular limestone is made from the point of view of what you can actually see... we don't have the ability visually to even see the porosity network in most rocks without magnification (and without measurements that may be quite oblique in some cases).  And you're referring to a particular limestone... due to depositional and burial processes, the same limestone strata may have much different (higher or lower) porosity and permeabilty in another locale.  I assure you that there are limestones (and dolomites, moreso) that soak up water like a sponge too... although fluid flow doesn't depend on high levels of porosity and perm.  Anyway, it's all a matter of scale... both of time and of physical properties.

Back to the basic question, it may also be the water in the alpine zone has not been in contact long enough with the substrate to  be altered as much as I'm assuming?  As I mentioned, groundwater picks up dissolved solids by passage through rocks and soil; the longer the transport, normally the higher the total dissolved solids, hence the alkaline groundwater coming out of springs in the mountains, flowing in the rivers that come out of the mountains, and out here on the plains.  Well, some simple testing may solve it for me, as I said.

I guess it's only fair that I ask what you do, James?

Nothing much of use.  I just like to grow plants.  I thought this topic must be your expertise.  I had to think really hard to understand your posts.

Your observation that water appears to run over a particular limestone is made from the point of view of what you can actually see...

Of course limestone can be porous, for example tufa.  Of course there are harder stones that resist erosion even better.  When I am talking about a hard low permeability limestone (actually dolomite in this case) I am relating to a geological feature in my area.  The Niagara escarpment dolomite does cause water to move laterally.  The best example I can think of is Niagara Falls.  Water moves laterally over the Niagara escarpment dolomite until the Falls.  Erosion is only significant in the plunge pool where the large energy release has carved the gorge back a number of miles.

we don't have the ability visually to even see the porosity network in most rocks without magnification (and without measurements that may be quite oblique in some cases).

Maybe so, but we can still see the results in areas with vertical cliffs.  We can see water seeping right out of a cliff face.

If you really want a challenge ... try to figure out the reason Sarracenia purpurea (which normally grows in acidic bogs) is also able to grow in extremely alkaline habitats.  Mr. Todd Boland posted a excellent picture in the following thread.

An easy way to get an idea of how much water seemingly solid rock can contain is to weight it!

Submerge a stone for a while, the let the surface dry and weight it. Then let it dry for a while in an oven (not too hot) and weight it again. Maybe not very scientific but you'll get an idea of how much water different rock types can contain.

Interesting topic, both plant-wise and geologically :)There has been a lot of discussion of soil and water acidity/alkalinity in cactus growing circles, and while I wont try to give the whole discussion, there are a couple of interesting points that I'll try to give my paraphrasing of- any inconsistencies are likely mine rather than those who have thought about this a lot...lol (which relate to very different plants and environments than what we are talking about here)-- while many cacti come from areas with alkaline soils, it has been found in recent years that they respond very well to slightly acidified watering (people started by adding vinegar, and it has got more sophisticated) to compensate for alkaline well water and city water (rain water presumably does not need it).. the thinking being that of course rain water in nature is not alkaline, and apparently rain in electrical storms is particularly acidic, and some dry areas receive much of their precipitation in thunderstorms.. in any case, those adopting the acidified watering strategy for potted cacti have generally had remarkable improvements in health, growth, flowering and even insect resistance...

Re- Trollius vs Anemone etc-- achene is a fruit type that crops up in all sorts of plants.... Is it just my imagining (wasn't sure from the pic) or does the Trollius seedhead not look a lot like Caltha? The Anemone seedhead looks like many other fuzzy head spp. A canadensis has a very different seed head-- without looking up the proper terms- just sort of a ball of seeds stuck together till they ripen and fall apart... no fuzz, and no chambers holding them...

I love the Alplains Trollius! Lori's pure white is lovely, but I'd read Alplain's description in the paper catalogue and hadn't got around to looking up the image, it is as nice as I thought it sounded-- creamy yellows are my favourite yellows...