I have only four different kinds of pleiones but this one, 'Tongariro', is a rapid multiplier and a precocious bloomer.  I usually have plenty of bulbils to spare and would be happy to trade them.

claire I have tried Pleione a couple time and always manage to kill them!  :P I would love to trade with you for one and any growing tips you might have to pass along.I've got loads of Cyclamen hed., named Primula auricula, Primula sieboldii and other things.

My biggest tip for growing pleiones (from my experience killing a few!) is that they seem to like cool.  I grow them on the north side of my house in pots on a sand bed.  In the winter they are covered to keep excessive rain off but are outside in the frame, where they have survived many cold spells.  They like to be cool and dry in the winter -- don't store them in the house unless you have some very cold rooms.  I repot every year with fresh mix and I top them with dried spaghum to keep the soil damp because I use a very coarse mix.

Several of my Mediterranean ones flowering now 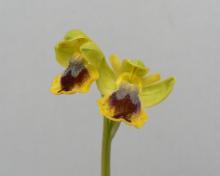 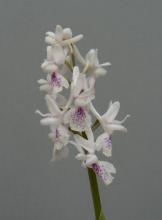 Nice! No need of a fungus partner?

Tony, exquisite orchids with pristine detail; always been a fan of Ophrys.

Claire, the pan of Pleione is picture perfect :o :o

Some more in flower

Ophrys cretica in the wild 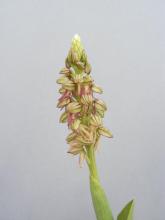 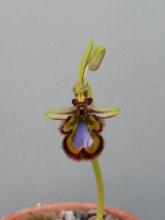 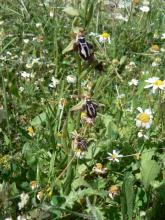 The Ophrys are unbelievable, it's like looking at those ink-blot (Rorschach tests), what does one see.  In O. speculum, it looks just like a big ol bumble bee, but look again, and one might see a fierce open-jawed monkey face glaring at you, fascinating. Ophrys cretica is equally stunning.

Here I just have the single terrestrial orchid, Cypripedium parviflorum v. pubescens, in two large clumps, so I fixate on those.  The "eyes" just showed up a few days ago, and there I go again counting the eyes or noses or pips (not sure of best term), even though too early to see all the growth points yet. Early count was 54, but last year I had over 80 stems, so there are more coming.  My second clump was squashed last year when a gigantic sugar maple fell over, but I'm pleased to report it looks none the worse for the trauma, with about 50 noses.

My friend, Marsha Russell, who gave me this Cyp in the first place, has convinced me to dig and divide one of the two large clumps this summer after flowering, and I can give her some plants back and I'll spread some divisions around the garden, its what gardening friends do :) 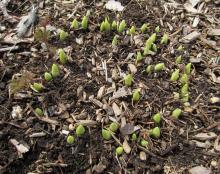 Hope you'll show us those  Cypripedium parviflorum v. pubescens in bloom Mark, 8) must be a marvellous sight. :o

Beautiful! I have tried to establish different orchids in the garden but with little success :-\