It looks like the European Coeloglossum is a bit showier- some dark or light but less green, and more compact inflorescences.Yes, we do have Calypso and Amerorchis - though I haven't seen it since I've been back, the patch where it used to grow was logged, and it's one of those things you'd be unlikely to see out of flower.. also Corallorhiza maculata

Definitely no rocks around here for Coeloglossum (I'll need to look more closely this year to see if it's there, but I suspect so)- for surface rocks you have to get into the foothills!

You are welcome, Lis!Coeloglossum viride is rather common both at the coast and in the lower alpine region here although I have only seen the alpine forms. It is not always rocky where it grows as it can be rather boggy too but not very acidic.

All these are growing on rocky outcroppings but with plenty of alkaline water seeping in the cracks. The first picture shows the companion plants.

I don't know about Ontario, Lis, but in the west it seems our Coeloglossum looks little like Trond's.Here is a plant that I think may be it, I'm going to have to look more closely this year, but note the long bracts which I think are characteristic of the species.. I need to reqad through the keys some more to see if there is any other important character I'm missing...In any case, images I've seen online of North American examples look more like my plant and not like Trond's at all..My feeling is that the more or less extended bracts may be a matter of the maturity of the inflorescence, but I could well be wrong... I will need to mark some plants this year and keep closer track! Whatever these are, there are tons of them here ;) 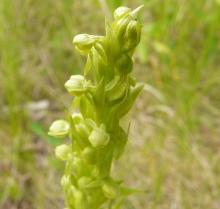 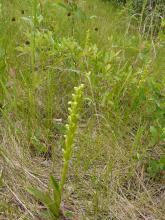 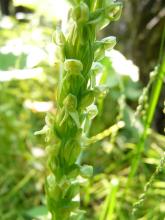 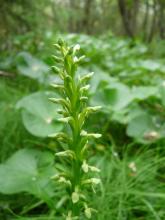 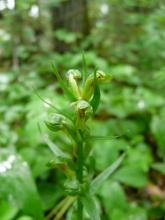 Cohan, the last plant you show (marked Platanthera) looks like a Coeloglossum. The others do look like Platanthera! Genetically Coeloglossum is close to Dactylorhiza and may be sunk into it.

Thanks for the input, Trond, I will need to look at them more closely this year- although I regularly photograph them, being not very showy and super common they don't attract much close attention- I've started to accumulate photos that focus on things like bracts and leaf characters.All those (bog orchids) here are very similar- more or less lanceolate leaves, green to greenish white flowers- we have no species with ovate leaves or white flowers.. All the photos were labelled Platanthera originally, since until this discussion I had not even noticed that Coeloglossum was even in the running...lolChecking through my books now, I see why I was not thinking of Coeloglossum: two of my books list it as a synonym for Habenaria, even Platanthera, and the only one that uses that as the main name (also gives Habenaria as synonym) shows a very leafy plant that doesn't look like those around here...

I think the other Platanthera in my photos above could be P hyperborea..

interesting rather than exciting a North American native 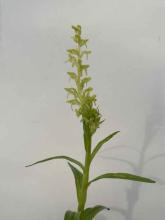 Similar to the natives here, Tony, though, I think, a more expansive inflorescence than some.

Hey, orchid junkies,Did you know you can germinate Bletilla seed on peat pellets?  I started some on agar but had to move them out of test tubes once contamination set in and found the seedlings seemed to take transplanting well.  After reading that Bletilla is one of the few orchid seeds with an endosperm I decided to give the old peat pellet method a whirl.  It's what I do for fern starting.  I take peat pellets, put them in a heat proof clear plastic container (like a plastic shoe box of The Container Store's accessory box), pour boiling water in and slap the lid on.  This more or less sterilizes it and slows down the growth of moss and other undesirable crude.  Once I've sowed my seed under the lights it goes.  I had bletilla germination, little bitty green protocorms, in under a month.  It'll be interesting to see how they do.

I have only four different kinds of pleiones but this one, 'Tongariro', is a rapid multiplier and a precocious bloomer.  I usually have plenty of bulbils to spare and would be happy to trade them. 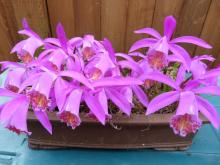