Such fun! These new methods are grand.... though, if I'm going to be picky, I'd prefer some more colour tones in the painting. ;)  Maggi

Applying a mix of earth-toned masonry paint colours, as described in Ian Young's article, sounds fabulous for giving the immediate impression of age and long residence in the garden!  (Masonry pigment can also be mixed into the grout or hyper-tufa mix to add colour in these different methods.)  It takes a long time here for lichens to colonize, and moss doesn't seem prone to grow on my hyper-tufa troughs, so even after many years, they still look raw and stiff!  I love the ideas of both texturing and natural colouration!

Hmm, I wonder where I can get some suitable styrofoam boxes?

Occasionally, (not as often as five years ago) they show up in grocery stores, in the self packing box bins. Grapes shipped from California.  The bottom is 10cm deep. The whole box measures 48cm x 38cm x 17cm. approximately.

Yes, I hear from other members who have gotten there fishboxes from the grocery store before, that many markets are going to plastic instead of styrofoam.

That little size, Sharon, would sure make cute troughs. I have never seen them here, though.

One nice thing about styrofoam is that if the box you have is too high, one can easily cut it down to the height desired.

Another couple ideas I should have mentioned before.  Unfortunately, I didn't get pictures of them:

1)  Some artists will melt some holes through the side(s) to plant in.  In theory one could make it look like the trough has cracked.  But be careful!  When you do such things, (and depending on other factors like wall thickness and size of the box), you might also be creating weaker spots that could fail when transporting the planted trough.

2)  Dips along the trough rim can be the perfect invitation for a cascading plant to ramble over the edge.  Done right, it can look very natural.

This is another example of the traditional styrofoam trough styling.  This was created by my friend Julie, but the dead Acantholimon is mine.  ;D 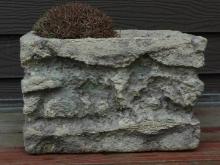 Thanks for the advice on where to get them.  I'll have to give this a try.  Nice examples, Rick.

Thanks for the advice on where to get them.  I'll have to give this a try.  Nice examples, Rick.

I'd say go straight to the departments- meat/fish and produce to ask if they get anything in.. probably goes straight into the garbage.. I think we may get some in our store occasionally, but I have a feeling if they smell like fish/meat my 'driver' would never allow them in the vehicle...lol

another thought- though they are not the same shape- is the cheap styrofoam 'coolers'- for picnics etc, which are readily available, and could be cut down to size-- they are usually  tapered though, not straight rectangular...

Styrofoam boxes need to be of the denser type - food grade or higher. Those used for  bulk flowers are not really strong enough.

Styrofoam boxes need to be of the denser type - food grade or higher.

Yes, I would imagine so... Styrofoam coolers seem a bit fragile even for their intended use, so I'd be hesitant about packing heavy alpine mix into them (plus the tapering-to-the-base shape seems a little off to me, for some reason).  Carving on the sides to give texture must reduce the strength quite a bit as well, so starting with a sturdier box seems very well-advised.

Carving does reduce strentgh but happily, the heat sealing with a powerful hairdryer or hot air blower ( paint stripper thingy!)  makesthe surface very strong and seem to redress the balance of the overall strength again.

I had thought about that, too.  It's good to hear another vote of confidence.

I have found from instructing classes on styrofoam troughs, that students, in general, really don't don't have a clue as to how much melting of the surface is correct.  Something I had previous thought to be pretty intuitive.