There is the traditional method of fashioning styrofoam boxes to look like troughs: In a nutshell, a chosen form's surface is roughened in whatever fashion by physically scratching and gouging with a favorite tool, the purpose of which is to mimic natural rock or whatever is desired. The surface is heated to solidify the roughened exterior and prepare it for painting, and then painted. But let the specifics of this method be for another topic. Here I want to show some newer ideas that have emerged since Ian Young first invented the very versatile styrofoam trough concept.

First, some photos of troughs done via the traditional method for comparison. Still the most realistic method, in my opinion, but it is a bit messy to execute, and more time consuming compared to the ideas to come. 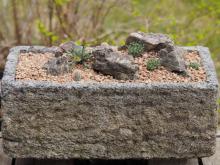 Now some styrofoam troughs made in the "traditional" manner: 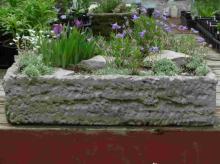 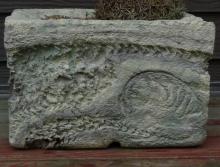 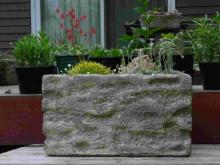 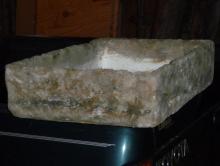 Some members in our Chapter have experimented a little, and come up with a couple time saving and less mess alternatives.

The first is invented by Julie. She has access to styrofoam boxes used for transport of medical vaccines, live organ transplants, etc. These are thicker than the traditional fish boxes, and they allow her to incorporate that quality into her method.

Rather than manually texturing the surface, her idea is to use the heat gun to create depressions in the styrofoam walls by heating (and shrinking) some parts more than others. The method is super quick, and there is absolutely no mess. Once done, it is ready for painting. 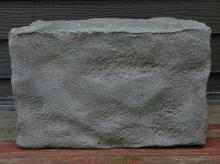 Another Chapter member, Ev, came up with this idea: she uses an old iron to initially melt the desired "pattern" into the styrofoam before a quick brushing with a wire brush. Then she uses the heat gun in the traditional manner to ready the box for painting. 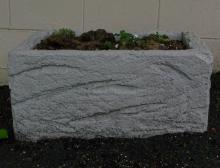 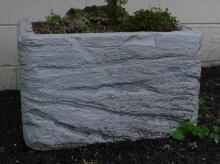 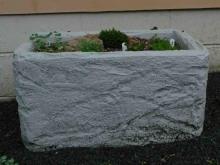 So what do you all think? Of course, no one has a monopoly on inventions, and someone else could have independently come up with the same ideas just described. Undoubtedly, there have been other experiments tried. Who would like to share their thoughts, successes or failures?

I've not tried doing this yet but have always wanted to after reading about Ian Young's techniques. I think I like the top troughs best, but wire-brushing looks to give a good effect. This will make me go and read Ian's description again on the SRGC site. It would be a great demonstration for our local Alpine Show!

We have found a stryrofoam trough display to be the best "attractant" at garden show functions.  People flock to it like flies compare to other presentations.  I was not involved in the making of this backboard; it is more than a decade old, and needs a revamping.  But, it still does the job!  We always have a planted trough in the center, which is why there is an "empty" area on the board. 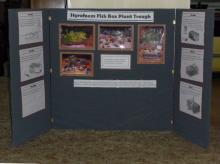 Thank you Rick - I think I will try and do something similar at our Show. I will do a little research on the SRGC site too.

They all look very serviceable!

Are those your troughs at the top, Rick?  (I'm guessing so from all the potted plants in the background - probably destined for your chapter plant sale, I'd bet. )  The troughs look really nicely planted up.  If you don't mind me asking a slightly off-topic question, what is the blue flower in the first trough?  I can't figure it out.

They all look very serviceable!

Are those your troughs at the top, Rick?  (I'm guessing so from all the potted plants in the background - probably destined for your chapter plant sale, I'd bet. )  The troughs look really nicely planted up.  If you don't mind me asking a slightly off-topic question, what is the blue flower in the first trough?  I can't figure it out.

Are those your troughs at the top, Rick?

Actually, the only one that is mine is the one in the lower left.  It was my first styrofoam endeavor.  I  am not that proud of it, but it is different so I thought it was apropos here.  The ones in the upper left and lower right were made by another Chapter member, Shirley.  They are my plants, though.  She does the best work of anyone, in my opinion.  The one in the upper right (with the dead Acantholimon) was another done by Julie.  She didn't like it, so she gave it to me!

The blue flower, Mark has got it right: Viola pedatifida.  Quite a mundane form, I might add.

The blue flower, Mark has got it right: Viola pedatifida.  Quite a mundane form, I might add.

I was going to guess this Viola species, but there was enough blur to the photo when viewed full size that I couldn't be totally sure, a species that I have posted about and have in the garden here (in a rather good form I think).

Ah, that's what it is then - very nice, mundane form or not.  I think I actually prefer the rougher texture of the upper troughs, if I had to choose, but both look good.  (My own hyper-tufa troughs lack any texturing on the outside, though they would have been better for it.)

Such fun! These new methods are grand.... though, if I'm going to be picky, I'd prefer some more colour tones in the painting. ;)

I must show this thread to Ian... he'll love that you are using all these ideas and modifying them.

I'm not at all surprised that you find these troughs make a fascinating subject for shows and s displays.... the SRGC has had that effect every time too... and in fact I've never known such a presentation NOT work to bring tremendous interest. The whole thing is just FUN.. and really useful for getting portable troughs. Well done the Minnesotans!

Here is a more complicated variation on the theme, sort of a hybrid between the fish box trough (which uses masonry paint on top on top of the textured styrofoam fish box exterior to create the impression of stone) and the hyper-tufa trough. This method involves slathering a purchased grout mix onto the outside of a fish box to create a stone-like texture. http://nargs.org/nargswiki/tiki-index.php?page=Troughs