According to the TV-news here New York has beaten all time high for April temperature? Is this true for your place too, Mark? No wonder why your plants grow fast. Here we will have sun the coming week but the air is a little colder (from the Arctic) so we probably get frosty nights. I'll take some pictures later today.

Well, we always get a few of what I call "stupid days" in early spring, where suddenly it gets hot as if the middle of the summer, but it only lasts a couple days at most, then back to more normal temperature.  But yes, last week we matched the record for the hottest day in April on that particular day, 86 F (30 C).  But this spring it has been mild overall, some record breaking rainstorms of several days each that caused lots of flooding, but the deep rains, followed by periods of mild sunny days and no frosty nights, caused a compressed spring explosion of growth, 2-3 weeks earlier than normal, and many things blooming at the same time that don't normally bloom at the same time.  As long as we don't get whacked with a freezing cold snap, I'm not complaining. :)

We even have Magnolias and Bradford Pear trees in bloom, unheard of!  Here's my seed-grown M. stellata - pink form. 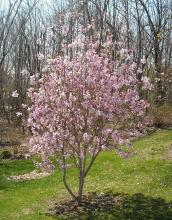 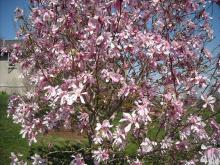 In our Big Woods ecosystem, the wild garlic (Allium tricoccum) and Dicentra cucullaria have been up for a while now.

Rick, do you ever see any pink Dicentra out in the Big Woods?  Regarding Allium tricoccum, it is a species that interests me... so common, yet actually scarce horticulturally.  I notice your Big Woods plants have red leaf petioles.  Do you grow it in the garden... ever eaten the leaves, they're supposed to be good.

In 1979 a minor variant of A. tricoccum was separated out as it's own species, A. burdickii ::), which was rather silly I think.  The USDA still maintains it as a species, but checking the online Flora of North America at http://www.efloras.org/florataxon.aspx?flora_id=1&taxon_id=242101410 shows that at best, it is merely a variety of tricoccum.  However, even with that, if you look at what separates the so-called variety burdickii, there is much overlap with var. tricoccum, and in the end of their treatment, it says "with its overlapping characteristics and distribution, Allium tricoccum var. burdickii is doubtfully separate from var. tricoccum".

What a splendid Magnolia stallata Mark! I have a white one myself (and not flowering yet - waiting for warmer weather).Here are some plants, pictures taken today. 1) Gagea lutea is a wild spring flowering plant in Norway.2) I have lots of hellebores, all from seed. This is  H. orientalis.3) The common wild Hepatica nobilis (blåveis) is certainly the spring flower here, but common only in south and east. of Norway.4) Hepatica transsylvanica is better than nobilis here on the west coast.5) I have lots of Paeonia too, from seed.

PS. 3) The front leaves are ivy, the upper right is Hepatica leaf. 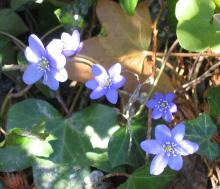 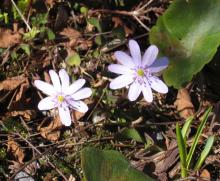 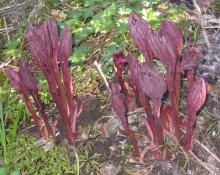 Some things are looking a little depressed here, after about 1" of wet snow on Thursday afternoon/evening and -10 deg C overnight... supposed to be snow flurries Sunday through Wednesday.  Oh well, it's still been an early spring.

1) Burly shoots of Allium obliquum.   There are lots of little two-pronged seedlings around it, too.2, 3) First butterfly I've seen this year - Milbert's Tortoise Shell. 4) Lathyrus vernus gracilis5) Helianthemum oelandicum ssp. alpestre is evergreen, but the stems and leaves redden rather nicely in spring.6) The current state of Corydalis solida (actually this photo was pre-snow; a little droopy now).7) Paeonia anomala 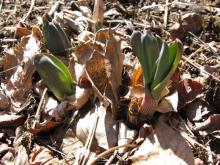 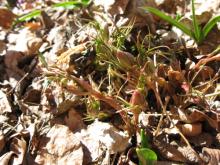 Some things are looking a little depressed here, after about 1" of wet snow on Thursday afternoon/evening and -10 deg C overnight... supposed to be snow flurries Sunday through Wednesday.  Oh well, it's still been an early spring.

Snow is not the worst, I would be very anxious if the thermometer dropped that much, fortunately it is very uncommon here (-1 oC last night).

I would be very anxious if the thermometer dropped that much, fortunately it is very uncommon here (-1 oC last night).

Well, it happens every year for at least a week in April... things are so less advanced here than where you are, that it really usually has little effect.

Lori - tell me about Lathyrus vernus gracilis, I don't know the "gracilis" subspecies or variety; are the leaves extra narrow?  What color are the flowers.  On your Allium obliquum, that looks like an amazing robust form, beautiful shoots... do you have a pic when in flower.  Please remember me for seed on this one, I used to grow it but no longer have it.

Trond - Your Hepatica nobilis is a nice clear blue; I need more forms of Hepatica, and blue ones too, all I currently grow is a pink-flowered form of acutiloba, which I moved to a moister spot and it is flowering and growing better than under drier conditions.  And both you and Lori showed Paeonia shoots... aren't they amazing!  :D

Mark, your Baptisia sphaerocarpa and Cynanchum ascyrifolium look and sound very interesting, and completely unfamiliar to me.  Can you show us more pix of them? 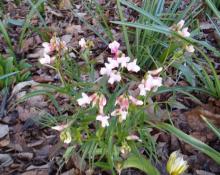 Mark, native flora books say there are pink forms of D. cucullaria in MN/WI (not rare, but I don't know how common), but I have never seen any myself.

Not that I have seen a lot of Allium tricoccum, but I do know them from an area a mile from me and a couple areas 100 miles to the south.  All have the red leaf stems.  I've never tasted the leaves.  Never thought about it, actually.  I only discovered the ones right under my nose a couple years ago, and my aim is to gather some fresh seed to propagate.  They are not that common in this area for me to feel okay about digging bulbs, and although they proliferate to the south, my moral judgment precludes me there also.

Last summer when I checked on the flowering of the ones close to me, they were attacked by some insect producing a mealy bug effect.  I didn't have time to closely inspect them then, and never returned to follow up.  Could it be woolly aphids?  They are known here, and I get them on my Alnus glutinosa and Alnus x spaethii.

A search this past week revealed a second small colony and few more scattered individuals near me.  Maybe I'll have better luck collecting seed this year.

The supposed differences between var. tricoccum and var. burdickii certainly seem trivial for a varietal designation.  It would seem the rank of forma is more appropriate (he says, posing as a taxonomist wannabe.)

1) Anemone ranunculoides2) Aconitum anthoroideum, a new one, planted in 2009.