Curious about where Kananaskis, near Calgary, Alberta Canada is, I was playing around with Google Maps, one of my favorite pastimes.  Googled the area, turn on Terrain to get a 3D sense of where you are... fun to explore.  Google Maps is great, but doesn't label many point of interest, such as the various peaks, and for some reason, rarely labels rivers and bodies of water (why not?).  So, in the Kananaskis area, I can see various mountain ridges, but they're unlabeled; Lori, can you indicate which is Forgetmenot Ridge, or indicate the path you hiked.  Panning around on Google Maps, I see other amusingly named mountains; Mt. Turbulent, Mt. Inflexible :D

Not sure on which side of Kananaskis your hike was, but I think the terrain map I show here (just to show what these 3D terrian maps look like) is the wrong side, north of where you were hiking. After making the first 2 screen captures, I found Nihahi Ridge (red X marks the spot in the third map), so if you could see that, Forgetmenot Ridge must not be too far to the north of Nihahi Ridge. 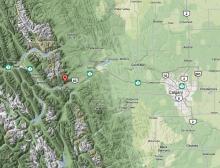 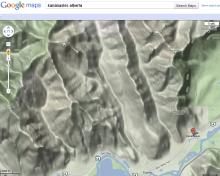 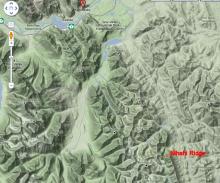 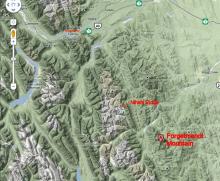 You've pretty much got it there with your last screen capture, Mark.  I was going to attach a piece of a topo map, with my guess as to the route... contour interval = 25m... but I can't get the file down small enough to attach.EDIT: Okay, I think I figured it out - see attachment.

If you look at this site, the third photo also marks the route on a 3-D topographic view.  http://hikealberta.com/hike/forgetmenot-ridgeThe "end" of that route, in red, is just one of many options... we usually continue SE along the ridge, which is much more interesting, out toward and onto Forgetmenot Mountain.  Of course, once you're up there, you can go any which way you want - the ridge has several fingers to be explored.

Cool!  I used the link you suggested, which has a Google earth KMZ file; if one has the free Google Earth Plugin in their web browser, it'll launch Google to that bookmarked location.  Then one can zoom in and out, and "orbit" in any direction and elevation.  I saved off three views, the second and third views are lower in the horizon, to get a better sense of the mountain relief, the last view looking in the opposite direction towards the valley floor. 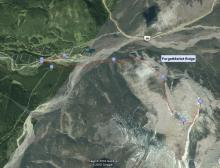 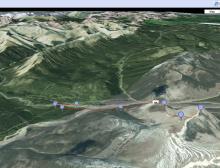 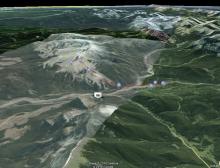 I have to wait till I get home to amuse myself with this. Haven't enough bandwidth with my cellphone.

For those who have the endurance to finish this photo marathon...  ;D

1 - 2) I'm puzzled by this one... Erigeron grandiflorus?  From googling... it seems that petal width can vary quite a bit in this species (or among formerly distinct plants that have been lumped into this species).  The non-leafy stems and the furry involucre make me think Erigeron...3, 4) Leptarrhena pyrolifolia5) Oxytropis podocarpa, with its feathery foliage... the flowers will soon change to showy, red, inflated seedpods6) Silene uralensis... the leafiest, burliest one I've seen!7) Smelowskia calycina8) A beautiful, if austere, little garden of brilliant Rhodiola integrifolia, Smelowskia and tiny ferns9) Potentilla ssp.... very common on the ridge... Yeah, I'm not sure what this one is either!10) Eriogonum ovalifolium, coming out of winter... the next time I show these, they will be beautifully filled-out and in bloom

Lori,  the pictures are wonderful.  Is the Silene uralensis the same as Silene/Lychnis apetala?  I've seen it both ways and never knew which was correct.  This little plant is one of my favorites in Colorado - found high up in the Mosquito Range and not very plentiful.  Do you grow this one?  Is it rare in your area?  The Dryas pictures are superb.

Lori,  the pictures are wonderful.  Is the Silene uralensis the same as Silene/Lychnis apetala?  I've seen it both ways and never knew which was correct.  This little plant is one of my favorites in Colorado - found high up in the Mosquito Range and not very plentiful.  Do you grow this one?  Is it rare in your area?  The Dryas pictures are superb.

Anne, Lori and I did some sleuthing on the confusing nomenclature of Silene uralensis here :D:  http://nargs.org/smf/index.php?topic=79.msg554#msg554

Lori and Mark, whaat a pair of sleuths!  Unfortunately, I'm still a bit confused.  The pictures certainly look like the plant I saw twice (Mt. Monroe, Colorado, close to 13,000').  I thought it was a charmer but the weather was terrible and the slide was poor.  It was the only plant I found and I looked for others for some time.  So I'll look for seed of all the names mentioned.  One of them must be the right one. Many thanks for all the information.

According to my main local reference (albeit from 1992), Lychnis apetala was renamed to Silene uralensis, so, yes, apparently the same plant.

No, I don't grow it.  Perhaps others around here do?  I would say it is uncommon, perhaps, in the habitat it favours here, which seems to be scree slopes.