Re. our earlier chat on mildew resistance, from an old plant tag...."Pulmonaria 'Excalibur' (Terra Nova Nurseries)... mildew-resistant as are all selected P. vallarsae crosses..."

I'm not sure if this is implying that P. vallarsae is mildew-resistant, or that they are carefully selecting crosses that are, from a population that generally isn't... ?

Maybe I should re-title this topic, to something like "useful spring and late summer Lungworts" because here in New England, they go through a rather alarming and remarkable cycle.  Of course in spring they are highly ornamental both for foliage and flower, but in early summer they go through a terrible phase of severe mildew, looking horrible, like something that should be tossed in the trash bin, but remarkably recovering later in the summer, making gorgeous clumps of foliage.

Most all of mine are self-sown hybrids, the named ones long since replaced by seedling progeny.  So now I don't pay much attention to the named cultivars, instead enjoying the variety of self-sown seedling plants. 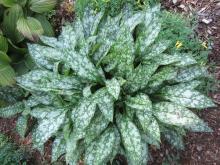 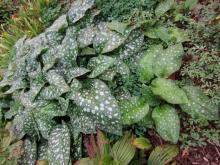 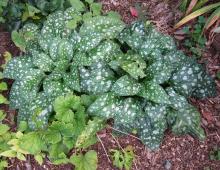 A couple garden scenes showing just how visually attractive these Pulmonarias are in the ragged late summer season garden, after an exceptionally hot summer, and alternating periods of drought and heat, followed by daily monsoon rains and steam heat, and repeat the pattern. Any plant that can come through such a challenging summer is worthy of attention.  These seed around a bit too easily, so I have to keep them in check, but it's beneficial to have such self sowing, I can always save the few that I want, and weed out the others. 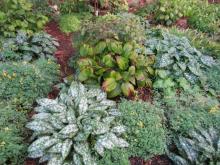 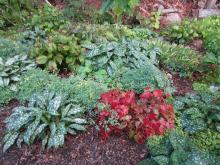 It's amazing how plants bounce back from the challenging conditions in your area, Mark!  Aside from the gorgeous pulmonarias, that red epimedium hybrid is stunning too!  There is another plant in your photos that looks fabulous also - what's the red-tipped plant with the linear(poor description) veins?

Pulmonaria is a very useful genus here too... the plants mostly only have to withstand dry conditions and wilting (with some then being affected by mildew), aside from getting pummelled by hail.  This plant (with some similar seedlings below it) is a good, mildew-resistant one that has been looking great all summer - Pulmonaria vallarsae 'Marjerie Fish'; (these are alongside the cat pen, where our cats can disport themselves in the fresh air and sunshine without either getting run over by Buicks or being able to exercise their avicidal tendencies  ;)):

Various seedlings on the edge of what we have been euphemistically refering to as the "vegetable garden"... (a spur of the moment thing... not surprisingly, from a July planting, only radishes and spinach have produced yields  :rolleyes:):

The one in the middle picture above is looking rather 'Excalibur'-like... presumably the influence of two 'Excalibur' specimens along the side of the house, one of which is shown below (another excellent mildew-resistant one):

My goodness Lori, you have some near white-leaved Pulmonaria plants, outstanding!  The "red-tipped plant with the linear veins" is Cypripedium parviflorum var. pubescens. Hopefully NARGS forumists will see that Pulmonarias are awesome plants for the hardy shade garden, withstanding adverse conditions and always pulling through.

Both of you Lori and Mark, really do have some very nice specimens of Pulmonaria :oTill now I have been more interested in the spring flowering display than the leaves. My plants disappear among stronger growing neighbours in summer.

Mark - I have always thought of woodland plantings being as delightful in spring for the tapestry of foliage as flowers. By now many of the plants in shade in our garden have died back, but things like pulmonarias and hellebores still look really good. Your pictures though look as good as any spring planting and show how really valuable these plants are; I must work harder to get the same effect under the apples where I am steadily growing more and more woodlanders. Would love to succeed with cypripediums but have always thought them to be pretty specialised in what they need.

Great looking plants! I haven't seen any locally, but I don't often get to the real garden centres, just occasionally check out the big box offerings.. Something to watch for.. Some of the lance-leaf types Lori shows are especially nice!