I have grown 2 Primula rusbyi from seed, and they are now 3 years old. The one I photographed is about 2 weeks ahead of the other one, which I planted in a more shady area of the garden. It's been blooming for about 4 days, and today I took a few photos of it, the best of which is below. If it sets seed, which I'm counting on, I hope to have a whole group of them next year. It's a simple but beautiful plant, and it appears to be pretty easy here. I have it growing in among several granite rocks in a sandy soil mix. It gets morning and late afternoon sun, but only in April does it see the midday sun. 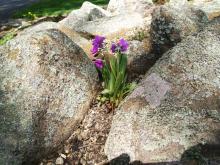 Peter...a fantastic plant and your garden is really wonderful! Thanks for allowing the Primrose nuts come through last weekend. I hope to get to see your gardens later in the season.

Here's an old Primula marginata in a trough, looking a bit ratty now, but the old leaves will all be replaced soon. 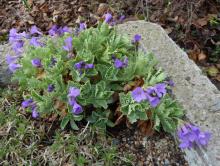 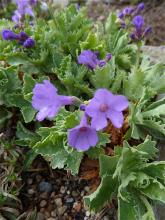 Hmm... Peter, your posting reminds me that I intended to take cuttings to rejuvenate my old P. rusbyi that have ceased blooming... I'd best get to it, I suppose.

Thanks, David, Todd and Wim for the Primula ID suggestions.  I don't usually put a lot of faith in identifying cultivars from pictures as there can be many similar ones, and for me is not that important anyway.  But knowing that it is not cultivar Jewel is more valuable.  I feel much more comfortable knowing that I don't know the true identity, than masquerading a plant with an incorrect name.

I can thoroughly recommend the book "Primroses and Polyanthus: A guide to the Species and Hybrids" by Peter Ward, published by Batsford 1997. It's available on the UK version of AbeBooks from a US store, Warren F Broderick Books, at $5 plus p&p. Particularly good for descriptions of many of the old varieties.

Nice pic of 'Lady Greer' posted to the SRGC Forum in the Primula 2011 thread, by John Weagle.

While waiting for the 2012 Primula season I revive this thread!Here's a primula flowering last spring - have forgotten the name as usual ??? 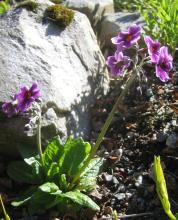 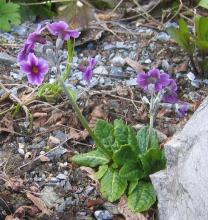 Super pretty Primula Trond! Wish you knew which it is!!! Perhaps the APS seed-exchange has it!! Which reminds me....all non-members of the American Primrose society are welcome to place orders in the seed-exchange second round! I will be filling orders March 1st. So check out the list here...http://americanprimrosesociety.org/index.php?option=com_content&view=art... and see if there is anything you can't live without!!  :D