I also grow Comfrey - my introduction to it in the 80s as a tea plant and vegetable coincided with the carcinogen scare, so I left it alone. I grow the selection Symphytum x uplandicum "Bocking 14", a selection made by the Henry Doubleday Research Association in the UK who championed this "wonder plant" until the scare. It is also used to make comfrey fertiliser as Cohan says (just fermented leaves, like nettle water) and that's how I use it today. It behaves very well in a garden, not spreading invasively like some of the species. 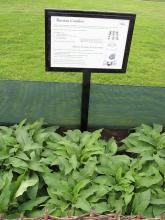 I love the pin-striped Arisaema, Wim!

A. fargesii is one of the easiest Arisaema's to grow...if I get seeds this year, I'll send you some.

It's nice to see the beautifully-grown Dienanthe in both Rick's and Wim's gardens.  (Mine has succumbed to drought and general mistreatment... sigh.) 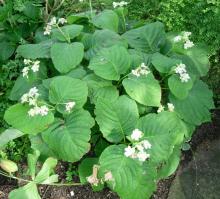 Much to look at here! Deinanthe is a favorite of mine but my plants can't match yours! They're often damaged by slugs.Comfrey is a weed in my garden, selfsowing all over the place. However it is easy to remove when young. Twinflower is very common here except the driest places. I love their spicy fragrance.Arisaemas are always special but the speciosum is not the least!

Still going strong, flowering for the last month and a half, is Kirengoshoma palmata.  Last year, the plants completely collapsed in the record-breaking drought and looked hideous, this small genus of Japanese woodlanders is the plant equivalent of a canary in a mine, one of the first plants to show water stress and flag with the slightest whiff of dryness.  This year we've had ample rainfall, and these large plants (to 5' tall x 5' wide) drip at the tips with waxy yellow flared trumpets.  The foliage is unique, bold, and attractive as well.

I'm always interested in what blooms attract hummingbirds; today I heard the close whir of a hummingbird's wings, as it visited each and every flower on my large Kirengoshoma stands, the first time I witnessed this particular hummingbird nectar choice.  In the second photo, I marked a red arrow where the hummingbird is, and included an enlarged insert; sorry for the poor photo quality but the entry-level camera I share with my daughter is useless for action photography and macro photography, but you'll get the idea. 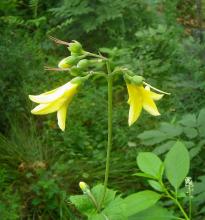 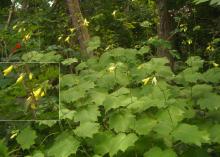 Well grown, Mark!My plants do not show any colour to the flowers yet. They are very late flowering here.

Have you considered if your plants belong to the Koreana group/Kirengeshoma koreana? If I remember rightly the Korean form opens the flowers more and has a stiffer stem. My plants are very lax. But this can be temperature related of course.

"Have you considered if your plants belong to the Koreana group/Kirengeshoma koreana? If I remember rightly the Korean form opens the flowers more and has a stiffer stem. My plants are very lax. But this can be temperature related of course."

I agree too...the plants we have at work labeled K. palmata are much more cascading and a bit more closed than yours Mark. The K. koreana haven't started blooming yet, but I'll bet they are going to look just like yours.

"Have you considered if your plants belong to the Koreana group/Kirengeshoma koreana? If I remember rightly the Korean form opens the flowers more and has a stiffer stem. My plants are very lax. But this can be temperature related of course."

I agree too...the plants we have at work labeled K. palmata are much more cascading and a bit more closed than yours Mark. The K. koreana haven't started blooming yet, but I'll bet they are going to look just like yours.

Very interesting Amy, you've given me something to look at more closely.  And when I start looking up Kirengeshoma palmata and koreana, the puzzle deepens and I'm no closer to an answer!  What I'd like to find is a definitive publication that delineates the difference between palmata and koreana, and on that front, I haven't yet found anything conclusive.  First, there's the reference to the "koreana group" or K. palmata koreana group", suggesting ambiguity on the two "species". There's even uncertainty regarding the family and taxonomic standing, originally placed in Saxifragaceae but some authorities now placing it in Hydrangeaceae, and the genus is listed as "status unresolved" in The Plant List.http://www.theplantlist.org/tpl/search?q=Kirengeshoma

I also have a plant that came to me as K. koreana, which has leaves that look decidedly different, although my plant languishes in a drier part of the garden... not sure if it's still alive.  It has never flowered for me.

So, I very might very have Kirengeshoma (the koreana group), but who really knows.

After a long search, I did find this one recent (2010) paper.  While very technical, it does have some taxonomic language that is helpful, which makes clear that there are two species, and where each is native to.http://www.amjbot.org/content/97/6/e48.full

Here's an excerpt:Kirengeshoma (Hydrangeaceae) comprises two extant species, Kirengeshoma palmata Yatabe and Kirengeshoma koreana Nakai, both of which inhabit warm temperate-deciduous forests in eastern China/southern Japan (K. palmata) and South Korea (K. koreana) (Qiu et al., 2009). Kirengeshoma koreana is restricted to one locality, Mt. Baek-unsan, whereas K. palmata is known from four sites in eastern China (Zhang et al., 2006) and three in southern Japan (Chang et al., 2007). Because of their small range size and small number of populations, both species are treated as “endangered” in China, Japan, and Korea (Qiu et al., 2009) and are considered “critically endangered” by the International Union for the Conservation of Nature (IUCN). Both species are of high ornamental value because of their large attractive flowers and beautiful leaves. Kirengeshoma palmata is also a medicinal plant, containing biologically active flavonoids in roots and rhizomes (Zhang et al., 2006).

1.  Kirengeshoma species are from Japan, Korea, AND China, the latter is almost never mentioned.

2.  There is a color map showing where the species are found.

Still haven't found a document that lists the taxonomic differences between the two species!  Most references to K. palmata describe a plant 1 meter tall (some say 120 cm, so a trifle taller).  My plant gets 5-6; tall (almost 2 meters), so perhaps my plants are K. koreana after all, although without a botanical description of K. koreana, it is still hard to know for sure.  Also, as Amy suggests, the more flared flowers suggest K. koreana too, as most photos I've seen of K. palmata have more drooping bell-shaped flowers that don't open as much, but that isn't consistent across the photos I've found... maybe the two species are mixed up in cultivation.

Here's a drawing of K. palmata from the Flora of China.  Interesting to see the base of the stems are square in cross-section, I have not noticed this before.  Also interesting, Flora of China still places the genus in Saxifragaceae.http://www.efloras.org/object_page.aspx?object_id=12438&flora_id=2

This link describes the Japanese derivation of the name Kirengeshoma:http://www.rhs.org.uk/Gardens/Rosemoor/About-Rosemoor/Plant-of-the-month...

Maybe I have flogged this horse long enough ;), but I wanted to share a recent development.

While perusing a garden center, and checking out the "shade perennials" area, some of the tables were pretty well picked over, but there it was, sitting by itself, a lone Kirengeshoma koreana.  So, I had to buy it, and then compare with my garden plants identified as K. palmata.

Placing the plant right up to my 6' tall plants I have under the name of K. palmata (still in nice bloom by the way), the two plants couldn't be more different.  The newly purchased K. koreana has thickish, waxy, heavily rugose leaves, whereas my garden plants of K. palmata have smooth matte grayish-green leaves 4-5x the size, looking completely different.  In the closeups of "koreana" you'll notice how the upper stem cauline leaves are "alternate" whereas the "palmata" leaves are strictly "opposite".  When the buds open on "koreana" I'll take side-by-side photos of both in bloom to compare.  I'm still hoping to find an actual botanical description of K. koreana, with which to compare to palmata. 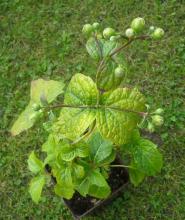 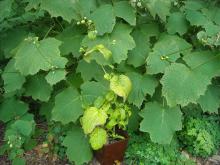 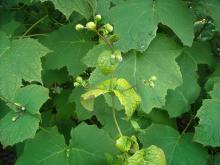 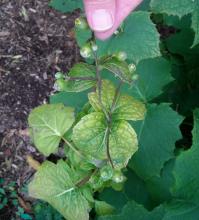 Kirengeshoma "palmata" still in good and ample flowering, the end of August 2011.  It helps that we've had ample rain this summer, and the impressive 5' wide x 6' tall clumps have been blooming throughout July and August. 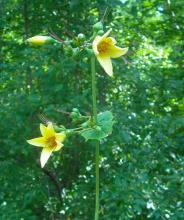