I'm glad that you find this site interesting; we certainly do.  And thanks for your first post's insight on how Mirabilis grows for you.

I hope you will continue to contribute as you feel the impulse.

We do seem to be getting warmer in Minnesota.  Climatologists predict we will have summers like Kansas and winters like Northern Illinois by 2100.

Wow. As I recall, it was regularly minneso-very-oppresively-hot-and-humid in the summertime as well.

I mean no offense with the minneso[insert whatever] comments, just playing with the word. I liked it there, despite the climate. (I still own the place, or rather, rent it myself, from the bank. who know's? I may return one day to see which of the perennial weeds out competed the others, but probably not. more so, it horrifies me to speculate what has become of my untended gardens because neither the previous tenants nor the current tenants even pretend to be 'gardeners'. too depressing)

The sentiment was and is that I really do miss the natural resources that I had in Minnesota that fooled me into thinking that a person could just plant stuff and it would magically grow--anywhere. When I tried that here, on the mountain, in the alkaline, rocky-clay hardpack sans irrigation, I became very discouraged. So yes, I have purchased rocks--because big, beautiful rocks are stellar in the winter, too, and I can't kill them--but mostly, I deplete my finite resources to haul in truck loads of soil amendments and finagle irrigation--because I must grow things, lots of things, even if I don't know their names.

Regarding the forum--not too confident that my urges to contribute would be worth much more than a pitiful laugh to you all, except, perhaps, to encourage other lurking neophytes to keep trying...even as I fail...

Anybody want to see pictures of the Amaranth Forest that sprouted up and took over my new rock garden that was supposedly dedicated (hah) to the cute, little, alpiney-type plants that I wanted to try? (which has nothing to do with Mirabilis)

June-ish--just planted up, pulled out hundreds of seedlings and left a few 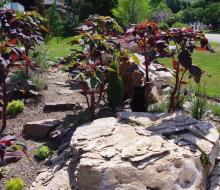 September--got busy with other things! whoops, had to get out the sawsall

one with Salvia reptans

Should have a bumper crop again next year, if anyone wants seeds! No-they are a beautiful menace. All over the back yard too. Don't do it to yourself!

Minneso[whatever] is  badge we tend to wear with honor.  Nothing offensive there.  Interesting about the amaranth.  I grew a grain amaranth one year.  As I harvested,  I could see a lot of seed dropping out as I cut and bagged the heads.  I was expecting a carpet of seedlings the following year, but not a one came up!

Nice garden so far, including the amaranth. I have to say, a garden without surprises would be pretty boring!

Aren't they all a grain at maturity or a yummy little green or red for a salad --or sautéed w/ butter--when young? or are some inedible? I really don't know, but I hope I haven't been wrong...

I grew quite a variety of them as re-seeding annuals in the holes, cracks, and crevices of my old decaying barn foundation in MN. Had some absolutely splendid golden things with about 3' x 2' shaggy, lion's mane heads on 'em, plus a bunch of different red ones with white, yellow, and black seed. It was really a spectacular blend.

I am surprised that you didn't have a carpet of seedlings, or at least a few somewhere. For me, in both states, they tend to end up anywhere and everywhere (birds and my carelessness) that they land --in the sun, inevitably where I don't want them, i.e. edge of the sidewalk.  In this case, I re-purposed some heavily inoculated waste-dirt mounds from the previous fall, in a technique known as poor planning, when I decided that I needed just a little more crappy dirt in the wild-hair-new garden...

I love the way you garden! I bet your cat loves that jungle effect, too. Deep rooted plants are great for getting nutrients up into the top layers of the soil where other plants can enjoy them when they decompose.(As an aside my Dad planted Amaranth in our garden in Melbourne when we were kids and it was always appearing in places for years! In India a low growing sort is grown in fields and harvested as "bhaji" - basically used like spinach. If you have some seeds spare I'd love to try it again.)

Keep posting pics of your garden!

I have certainly been enjoying the plethora of pics of all the special beauties that you can grow and that I've never even heard of--thank you.

That darn cat and the other one put themselves in a lot pictures, for some reason, dogs too.  ?

I sawed off all the amaranth; gave seed heads away to many travelers who asked for them; propped the rest in the trees for the birds and probably infected half the town. (I garden on a corner lot in front of everybody, which is quite a switch from my previous, more private settings. The place had been abandoned for about 10yrs and should have been condemned...roof caved in thru the first floor into the basement etc., about the only quasi thriving plants were the morning glory and thistle  ...so I regularly have a lot of folks stopping by to check out the transformations. It is a good way to share amaranth seed heads and sedums I guess. I keep trying to get rid of iris, but few will help me out there. So, I chopped down and dug out a bunch siberian elms and ailanthus thickets and made more new gardens this fall. Played a lot of plant tetris; opened up some of my other jungles and put in a few thousand -cheap dutch- bulbs, a bunch of perennials, and fruit trees. Should be a pretty magical scene, eventually, but not necessarily for this site.)

I was kinda joking about the amaranth seeds, really, but I will have plenty again next year if you seriously want some.

I hope to have new plants and transplants survive the winter and look like they live here next year--so I can post some more 'worthy' pics and say 'hey look--its still alive'.

but maybe some pics of cool rocks in the snow...

Jane, welcome to the site!  Your rock garden sure looks like a great start, and I love all the colour from the amaranth.

What a beautiful view from your place!  I'd love to roam around that kind of country. Seems like it would likely be a fine climate for rock gardening too.

Funny, I caught the comment about your cat inserting itself into your pictures but had to go through the photos over and over before I finally noticed the black cat, looking like  a shadow.

Back to the Mirabilis multiflora front, I did grow a few from seed one year, and eventually planted the roots out after the green tops went dormant...  never saw hide or hair of them after that.  Maybe I'll try again some day.  It is certainly encouraging to hear of the various places where it's being grown successfully.

It is great country, and the dogs love to run the mountains while I look at plants and rocks.

I'm still trying to figure out this climate! I have killed stuff because it got too wet in the clay--without watering--and then killed stuff in my amended, well drained soil because I couldn't water enough. argh. Many stuffs, though, do very well, besides the amaranth, and I am pleased with the summer success underneath that forest, and hope to have many survivors to fill in next year.

Re the Mirabilis--I tried to extract some oenothera speciosa (the monster which much be banished now) and thus begins the experiment with planting out some of its roots...