Yes, you certainly have a very lovely collection, Rick!

The North American Lily Society convention was here in Minneapolis this month.  My garden was on the self-guided tour, so I've spent a lot of extra time readying, but it seemed to be of no avail.  My locality had 3 more inches of rainfall in June than every area 10 miles or more away, which brought the month of June's total to 15 inches!  (Our normal yearly precipitation is only 24 inches.)  Thank goodness I live at the top of a hill.  I had nine Lilium species blooming at the time of the tour, and three of them had just opened on that very day.  With the torrential downpours, it was difficult to keep them looking good (and some of them upright), but it was surprising how well most of them stood up on their own. 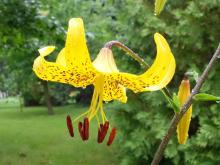 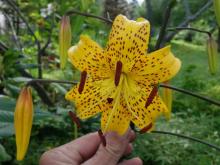 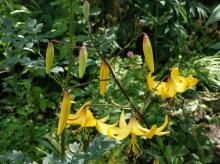 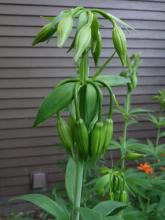 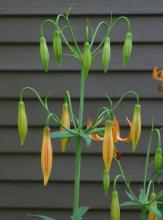 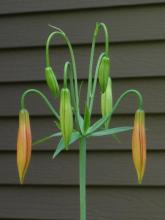 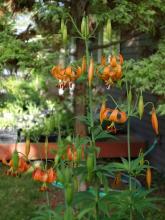 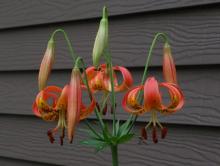 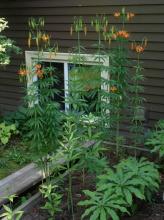 Lilium canadense - lifted to view the face, and the correct orientation. Lilium certainly do well for you Rick...

Well, I pretty much only show the good stuff.  This is the whole plant, and you can see the inflorescence structure is  little goofy.  All my Lilium canadense show chlorosis, which I think is mostly from lack of soil acidity.  It usually clears up as the season progresses, but the enormous amount of rainfall this year is exasperating the problem, I think.  I'd foliar spray with a mix of Fe, Mg, Mn, Cu,B, Z, (which always helped in the past), but this year it always got washed off within a day!  Not sure which element(s) is lacking.  Epsom salt (Mg) alone, never helped at all.  By the way, in the pic there is another single bud in the foreground, the other tall whorled leaves are L. michiganense, and the low single whorls on the right is the fake L. tsingauense, with a couple I am letting produce seed in the background. But still, this latest L. canadense I am particularly excited about.  Not only is it the coolest one so far, but it also significantly less chlorotic, and I hope it's a trait I can breed for.  The first bloom from that batch of seed bloomed last year, and was quite different: https://www.nargs.org/comment/23717#comment-23717 I'll have a few different ones bloom this year, too, and we'll see what they hold.  I never would have expected such diversity.  I certainly am lucky there.

Rick, maybe you were lucky with the seed batch but you are a damn good gardener!

In my opinion even the "goofy" appearance of the inflorescence is nice. I don't like the congested ones of some of the newer hybrids.

BTW I would love to have some of your rain! Have barely seen some drops this summer. Both at home and at our summerhouse it is bone dry, here in the mountains where I am now it is a little better.

At home the mean temperature for July was 5.1C (9.2F) above normal. All the months so far this year have been warmer and drier than normal.