This seed has very erratic germination.  I have some that are germinating two years after being sown.  It may have something to do with whether the seed has been dried.

Gene, I think you're right about the seed being dried creating the condition of erratic germination.  I believe the seed is best treated as ephemeral, like Epimedium, needing to be sown "in the green" as soon as the seed is ripe, then one gets fairly uniform germination the following spring after a long winter freeze.  Last year, as an experiment (and as a desire to greatly increase my Jeffersonia stock), in late spring 2010 I collected gobs of J. dubia seed, then made a new planting area in my shady woodland garden beds, an area 4' wide by about 4-1/2' long, and sowed J. dubia seed thickly through the area.  The seed was patted down on the soil, and covered with a thin layer of well decomposed pine bark mulch.  I checked today, and the area is thick with seedlings just emerging, I'm so excited.  There will many hundreds (thousands?) of plants.  I'll post some pics as soon as the seedlings get large enough to be photographed.

Hard not to fixate on Jeffersonia, they're in their prime at the moment, most J. dubia in full bloom, but a few flowers on J. diphylla opening too.  Here are a few more photos of J. dubia.  In one view, you'll see that the forms I have are variable in flower color, some are of a good deep blue-lavender color. 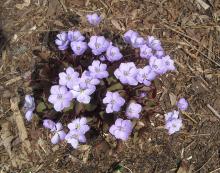 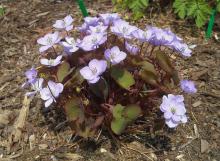 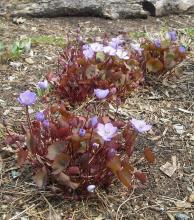 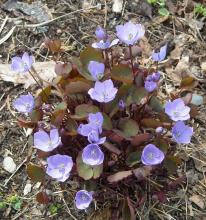 One more view of a Korean form of J. dubia.  This form flowers before the others, and has flowers that are more fleeting.  Notice a self sown seedling on the left and bottom edges of the photo. 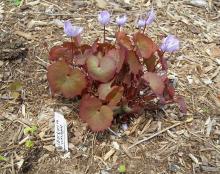 Gorgeous, Mark! Congrats on the new seedlings! a big patch would be wonderful :)

So pretty Mark! Mine are just showing above soil...but just the promise of them is so exciting! Have you ever divided them? I would love to make my small swath of them a large one  ;D

Given the rain we've had, I'm amazed that I've been able to get any pictures of anything for the past week of so, but I did manage a decent of my J. dubia and one of my J. diphylla just about to open. Hopefully it won't rain tomorrow, and the latter beauty will open its flowers for long enough for me to take a picture or two. I've had the J. diphylla for about 5 years, and it's got about 5 or 6 seedlings growing around it, one of which actually bloomed this year.  The J. dubia has been with me for 3 years, and has yet to produce any seedlings.

[MMcD note: photo labels were reversed, I downloaded and re-uploaded the renamed photos :)] 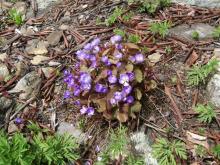 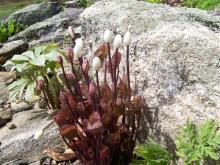 Mark and Peter the diphylla are really lovely,I have only seen white ones over here,never blue similar to dubia. The Epimedium book gives them as only white.

Tony, see the correction above, the photo names were reversed, but it has been fixed :)  Jeffersonia diphylla only comes in white, but I'm currently getting good germination on my attempted 2010 hybrid crosses between the two species (both ways), who knows, maybe we'll eventually see a blue diphylla-like Jeffersonia ;D

Thank you, Mark. The rapid and profound diminishment in my cognitive processes is worrisome, but hopefully will end when I get through this negotiation and manage to sell my company. A bit of sun might help too.

Oh dear Mrs W. and I were getting very excited and an email was about to wing its way across asking for seed. We shall manage to live with our disappointment.

We look forward to seeing the hybrids.

With ephemeral spring flowers a lot can change in just 1 week.  Our spring was slow to warm up this year, but in the past week with mild temperatures and rain, and some very warm sunny days, plants are "leaping" out of the ground.  I also realize, now that I'm back to being a working man (as opposed to unemployed), that I would have never have had the chance to experience the fleeting flowers on Jeffersonia as I did last year, nor would it have been possible to play around with attempting to hybridize the two species.

A couple Jeffersonia garden views, J. dubia in the first, J. diphylla in the second.  Lots of Dicentra cuccularia spreading everywhere; am getting worried about this one. 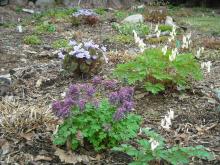 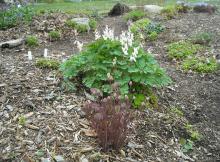 Two views of Jeffersonia diphylla, photos caught in an early morning dash before going to work. 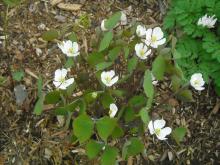 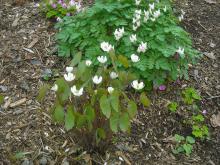 Last year I collected lots of seed on J. dubia, prepared an area approximately 4' x 5', and sowed the seed in place, covering with a thin layer of decomposed pine bark mulch. The seedlings are coming up thick now.  As it is, seedlings are appearing here, there, and everywhere, what a wonderful "weed" to have ;D 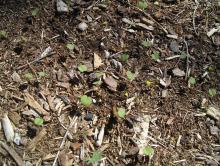 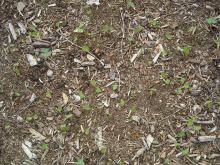 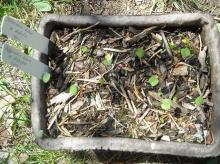 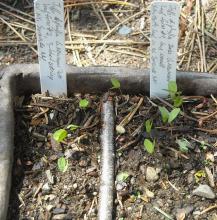