A terrible weather you have had over there!

Although I experience heavy snow and broken treelimbs sometimes it has never been like that. When it happens I remove broken limbs and make a clean cut along the trunk or main branch and never leave stumps. Last time i had to do this was 3 years ago when a Magnolia soulangiana was badly damaged (by late snow in April) at our summerhouse. (A lot of mature pines suffered even worse and lost almost all their limbs.)  Now the magnolia is back to its previous heights.

Mark, the fringe tree is (or was?) a beauty! Hope it regenerates well.

Mark, I'm so sorry to hear about the damage to your oxydendron.  Is this the first time it has had snow damage?  I was planning to plant one in the spring.  It's one of my favorite trees.

Mark, I'm so sorry to hear about the damage to your oxydendron.  Is this the first time it has had snow damage?  I was planning to plant one in the spring.  It's one of my favorite trees.

Ann, Oxydendron arboreum is a slow growing but a strong and rugged weather-resistant tree.  It almost never requires pruning. I can't remember its age exactly, but I'm thinking it is about 16 yrs old now, and the first time any branches broke was in our disasterous December 2008 ice storm, where the single leader snapped off, and some minor breakage lower down.

It was worse this time around, the 3 new leaders that grew in since 2008 all snapped off, and some other main branches broke, leaving gaps in the outline of the tree. But having 14" wet heavy snow in October while trees still have their leaves on is not a normal situation.  The photo below is not very good, but shows the tree as of yesterday, with the broken leaders on the grown and other broken branches already removed. It will recover, damage was not that extensive.

I would advise planting this tree, it's one of the most beautiful and elegant trees.  It is also tap-rooted and very late to leaf out, so it provides an ideal plantable home to bulbs underneath. 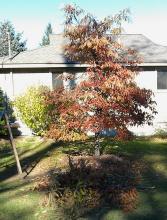 A terrible weather you have had over there! When it happens I remove broken limbs and make a clean cut along the trunk or main branch and never leave stumps.beauty! Hope it regenerates well.

When pruning, the general rule is not to leave stumps so as to preserve branch integrity, but I don't think it applies in this case.

Thus, the area where the new branch attaches to the old stem becomes the weak link in the new branch's integrity.  Witness how young water sprouts (that arise from adventitious buds) in a fruit tree's canopy easily snap off at their base.  (Water sprouts are often erroneously called suckers.)  This demonstrates their weak attachment to the base stem.

However years down the road, the overall branch structure could (and probably would) look better with less initial stubs.  But because the new branches originate from latent or adventitious buds, technically, the smaller the caliper of the base stem, the more sound the branch attachments would be that arise from that stem.  And certainly, as new branches grow, the parts of the stubs that remain stubs should be cut back.

Rick, I don't disagree with you. When I said stumps I am talking about something shorter than let's say 15cm depending on the thickness. If a "stump" is as long or longer than that and additionally have twigs I cut back to a sound twig. However branches damaged by snow almost always break or are teared off at or near the stem.

Optimism springs eternal... if my devestated Chionanthus virginicus tree doesn't spring back from such a drastic pruning, there is always seed!  I know I sowed the seed too thickly, but if I get a few trees out of it, then I can rejuvenate my affair with the beautiful Fringe Tree.  Actually, this past spring 2011, 3 self-sown seedlings appeared; I can pot these up next spring and consider planting them out or offering up at a seedling sale.

I wonder... my Fringe Tree is male, but evidently it sometimes produces female flowers and I do occassional get some of the dark blue olive-like "fruits" (very hard seed with a thin-layer blue pulp and skin on the outside), I wonder what percentage of male/female seedling trees one will end up with.  May never know, I don't have that much space to grow them on. 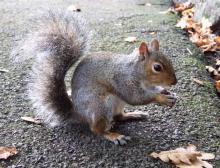 While I have great admiration for oaks (mostly red oaks in my area, Quercus rubra), a major downside to oaks in New England are armies of gray squirrels that spend every living moment of daylight burying acorns in my garden; they're particularly attracted to soft freshly planted beds, so everyday beds of hybrid Epimedium seedlings look like a meteor-riddled lunar surface, with collateral damage of seedlings uprooted and languishing about. Of course in spring, the squirrels are at it again, incessantly digging little potholes EVERYWHERE in search of their beloved acorns, digging millions of holes with failed attempts. For the rest of the growing season I pull out oak seedlings by the hundreds if not thousands... until autumn returns and the cycle repeats. 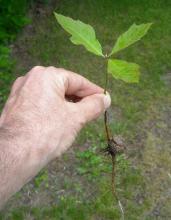 Oak seedlings are strongly tap-rooted and difficult to pull out, even in the early stages of emergence. I often find the seedlings popping up in pots, seed flats and even in troughs (I now cover all seed flats with wire mesh).  As I write this message on a laptop and staring out my dining room window, several squirrels are jumping about madly digging and buying acorns in a new hybrid Epimedium bed that I made this summer, each planted acorn ritualistically patted down these infernal rats with fuzzy tails ;) >:(

I haven't even begun to rant about chipmunks yet!

The biggest problem I have had with squirrels is they like to pull over my oriental lilies and steal the flowers when they are in bud.  The worst part is they break the oriental lilies off at the base when they pull them over.  After this occurs the oriental lilies do not resprout during that season.  I am hoping they will have enough energy to come up again next year.

I have actually been allowing certain weeds like chenopodium to grow in this bed because I think the squirrels avoid the thicker vegetation.  They probably realize the neighbor's cat might be hiding in such a place.

I have learned to cover my seed trays.  I also cover bulbs for a few weeks until the smell of dug earth has dissipated.  This smell is what draws the squirrels to freshly planted bulbs.  The squirrels are very eager to discover what kind of treat you might have hidden for them.

My best humane suggestion for dealing with the squirrels is to use a live trap to catch them and relocate them to some distant woods.  I have been told that some people put a little spray paint on the squirrel's tail to determine if any relocated squirrels have returned.

It seem that everyone loves them and enjoys feeding them in my neighborhood.  The result being, I cannot relocate them.  I also have to deal with an artificially increased population of these garden menaces.

Nearby neighbors have Ohio buckeye, Black walnut and Butternut tees.  Their seedlings are even worse than oaks, in my opinion.  (I've had a lot of experience with oaks at my parents' house, too.)  But there is really only one squirrel that frequents my yard and that's plenty enough.  How do I know there is only one, and not just one at a time?

Well, one day this happened: 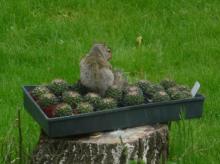 The poor thing was stuck there for hours.  I was hoping a raptor would swoop down and snatch him.  We have many that reside here at the edge of farm country.  But alas, he finally freed himself and limped away.  I had no squirrel visits for about two weeks.  That's how I know there is only one.

I've always wondered about cactus gardens in suburban areas, whether small animals, or even dogs, get stuck.  Now I know ;D  These days I don't have much compassion for squirrels and chipmunks, although I too would feel bad about one stuck in such a prickly situation, thanks for showing this example.

At any given time, there are a dozen+ gray squirrels on or close-by my property, dozens more all around nearby, there are red squirrels too. When I'm inspired to temporarily reduce the population, I use two Havahart (non-lethal) traps, a larger one for gray squirrels, and a smaller one for chipmunks and red squirrels. They're easy to catch with either peanuts or peanut butter as bait.  I release the catch about a mile away.  One has to be discreet about relocating these rodents, as I've heard you can get fined for doing this (although ironically it's perfectly okay to kill them if one is so inclined, but I don't kill them).  This gets tedious, but after a couple weeks of trapping and relocating 10-20 varmints, I can be relatively squirrel/chipmunk free for a couple weeks, but soon new ones move in.