Flowering now in the Southern Hemisphere

David, I have tried some NZ Sophora species without luck so far. Which one would you recommend in my climate? I have no hope in success with any Metrosideros though!

I am not entirely sure if Sophora would survive in your climate. However, you could try Sophora microphylla, the most wide-spread and hardy species. There are some provisos. It requires good fertile soils to grow well. It would not be happy on poorly-drained, low-nutrient acid soils. This species goes through an extended juvenile stage and may take 10 -15 years to flower. There is a lot of diversity in Sophora microphylla in terms of climatic adaptation, flowering times etc. Winter temperature would be the limiting factor (less then -5 degrees of frost). A lot of the forms sold commercially are the earlier maturing species ie Sophora tetraptera, Sophora molloyi ('Dragon's Gold'), Sophora howinsula ('Gnome') and are not as hardy.

Metrosideros umbellata (Southern rata) grows on the Auckland Islands (50 degrees 30 minutes south) so you could try that species as well.

I am encouraged to try both Sophora microphylla (in fact I have tried it once before - but it seems that the provenience wasn't the best) and Metrosideros umbellata. Have to look for seed though as plants are probably impossible to find in any nursery here.

Thank you guys for your spring flower show!

I can hardly wait for spring now! In fact spring is the best time of the year in my garden. I have lots of spring flowers but few summer and fall flowering plants.

Dave, are you sure that the Corydalis is a solida type? My plants never flower before the leaves emerge but that can in fact be a an effect of the climate.

Thanks Hoy ,pleased you are enjoying the 'show'.

Your garden sounds like mine .During the few times i come home from visiting other peoples garden in summer i realize i should be growing 'later ' flowering plants ,however my excuse is that I'm often away in the mountains over this period .........(read into that last comment I'm just lazy---wink ! smile!).

I'm no expert Hoy .The Corydalis was sent from Sweden as C.solida .The plant probably needs more light so maybe is a bit drawn.If you look closely you can just make out leaves at the base of the plant.

I had a quick check outside just now with the torch !..All my other Corydalis solida in bud show no leaves at the moment so i think it 's on account of climatic conditions.

Oh, my, Dave.  You have really been bit by the hellebore bug, haven't you? <smile>  It's a gorgeous display.  Thanks for sharing.

Of course they are so great for providing colour in the garden at this time of the year  .

Luckily there is a specialized Hellebore Nursery about an hour up the road.They have developed some stunning forms which have started to appear in some of the local nurseries in the last 2/3 years.It's so refreshing to see them as we are somewhat starved of new plant introductions that appear overseas on account of our strict Biosecurity regulations.

As odd as it may seem to all our Northern hemisphere friends spring is certainly on its way here. According to our local newspaper we have had the warmest July on record though some days have been quite cold. 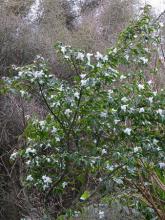 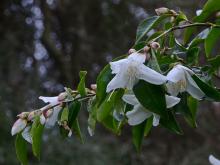 We've had the warmest July in a long time in the UK too, David! ;.)

That Camellia is really lovely - I wonder if it would survive in NE Scotland? - Must see if anyone is offering it over here.

Edit later : Hmm, yes it is available and no, the opinion given is that it won't cope up here without more winter protection than I can give it - rats!

Spring is nearly here and the little bulbs are in full swing:

A new Div 6 daff from Keira Bulbs in Canberra

my original clump of Babiana odorata has been infiltrated by a seedling - crossed with Babiana pygmaea I'd say! 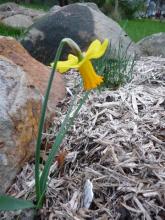 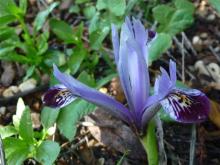 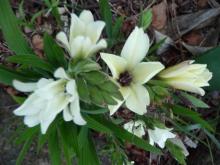 Some of the South African Romulea's provide colour at this time of the year .

Another yellow this time R.hirta .

However I understand that R.sabulosa is considered by some to be the king,( or is it queen?--smile ), of the lot. 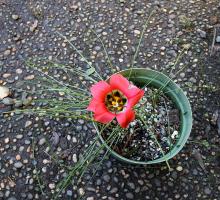 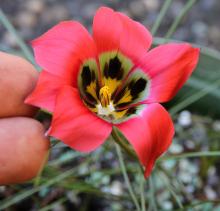 A few like Romulea rosea can be a bit weedy in our conditions so any species I grow from seed I trial in pots before deciding whether to plant out in troughs or garden proper. 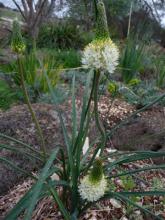 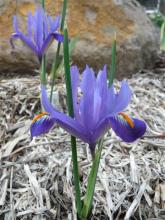