Don't forget the red ones!

And that's not bad!

What I can do for the moment is this Centaurea scabiosa with butterfly (Aglais urticae) and a bumblebee (Bombus sp).

The Centaurea is actually a lowland plant but it does very well at our cabin in the mountains tolerating night frost and flowering late and till it is covered by snow. It even manage to set ripe seed some years. All kind of insects are drawn to the nectar rich flowers. 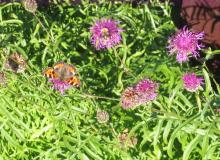 Lori, Silene regia is a HOT ONE!  I wasn't familiar with this native, now my eyes have been opened... Hot Cha Cha cha!

Get ready for retina burn with Zauschneria garrettii (or Epilobium canum ssp. garrettii as now known).  This grows luxuriantly, two plants are now about 3-4' across each (and 12" height), the spread more than I anticipated for, thus swamping other plants.  But I will move it to a place where is can spread comfortably, as it is so worth growing for the late season burn of red-orange flowers.  Most years, it makes a "smattering" of those lovely red-orange trumpets, but this year, perhaps due to the long sizzling dry summer, it looks to be a banner year for bloom.

First, a photo showing its expanse of growth, just breaking into bloom among late summer blooming alliums.  Second photo shows a closeup with more flowers open.  I'll post again in a week or so, should be its most floriferous year yet. 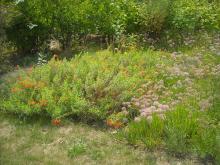 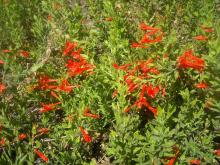 I don't get retina burn, Mark, but I taste it! It's like chili pepper - and not the bad one.I tried Zauschneria once but lost it. Have to try again.

One of the reddest here now is this Crocosmia cultivar. I don't know the name. Crocosmia are one of the genera thriving and expanding and often divided and given to garden friends. I got this  one without a name. 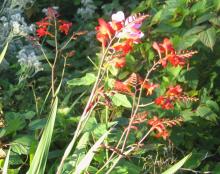 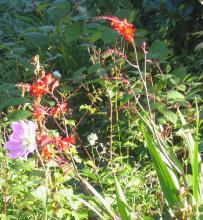 Not alpine, and not a flower... but the fleshy seeds of Euonymus nana var. turkestanica are red! 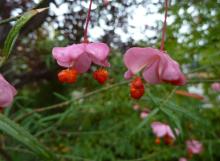 Long ago, before I realized the diversity in Euonymus fall shows, I grew Euonymus nanus var. turkestanicus.  The rabbits kept eating them down so I never saw the capsules and seeds.  I just couldn't figure out what the allure of this plant was.  That is, until the year it actually did flowered and produced capsules and seeds.  Of course, I was immediately smitten, and I still grow the shrub.

Fortunately, I am far enough west so the members of this clan are not invasive (although I always keep a watchful eye), and I have since delved into the genus.  My favorite so far is the pink and red Valentine colors of E. hamiltonianus  var. sieboldianus (more so than turkestanicus).  However after ten years, the shrub is becoming more tree like, and I don't want to allow space for that.  The image below was taken in 2008. It is the second species with capsules to color up in the fall for me.   The warty stems and brown flowers of E. verrucosus are attractive, at least to me.  The pic is pretty terrible: the flower color is caramel with a hint of pink.  I obtained seed of Euonymus cornutus var. quinquecornutus this year, but I don't think anything emerged yet.  I save all my planted seed pots for at least two years, so I will see what happens. 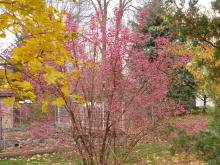 Not alpine, and not a flower... but the fleshy seeds of Euonymus nana var. turkestanica are red!

Hello fellow Euonymus fans!  Just started to post, and Rick's message came in.  Rick, you show a couple new ones I didn't know about, but nice tempting ones they are!  I bought my plant originally as E. turkestanica nana, although based on what I'm finding on the web, it should perhaps be the other way around, often seen as E. nana 'Turkestanica'.  Checking out IPNI.ORG, I can't find any valid entry for Euonymus nana, nor E. turkestanica!  There is however a Euonymus nanus and a E. nanoides, although web searches indicate a Euonymus nanus turkestanica, so E. nanus is probably the correct species name.

My plant was grafted on top of a standard, as the type plant is supposed to be a low sprawling plant.  I saw this in a nursery two years in a row, finally succumbed and bought it for a ridiculous high price.  It lived several years in the garden, making a surprisingly good floral show (see photo), the flowers bright red rather than yellowish-green as so common in the genus, and then the familiar hanging pods, pink in this case, opening to red-orange seeds.  It succumbed I believe to to drought, but that is drought to the grafted understock, not necessarily to the type E. nanus.

The one that I'm really a fan of is Euonymus sachalinensis, a small tree.  I saw this at the Case Estates in Weston Massachusetts, a now defunct outpost of the Arnold Arboretum, where it was in espalier form, trained and pruned to best show off the amazing bounty of fleshy red pods and brilliant red-orange seeds.  It has gotten very late, but I promise to show E. sachalinensis, one of the very best and showiest of the bold-fruiting Euonymus species. 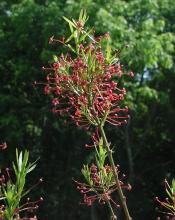 Who is our Botanical Latin "specialist" here?  As I understand, euonymus would be masculine, or possible neuter.  How can nana or turkestanica (both feminine adjectives) be in gender agreement?  My Stearn's book seems to be misplaced, not that I would necessarily get it, anyway.

E. sachalinensis does ring a bell in the back of my mind as one I have come across in literature, and worthy of ferreting out.  Mark, I though Euonymus spp. were no-nos in you neck of the woods?

E. sachalinensis does ring a bell in the back of my mind as one I have come across in literature, and worthy of ferreting out.  Mark, I though Euonymus spp. were no-nos in you neck of the woods?

The overly used burning bush, Euonymus alatus, is now considered an invasive species, and in 2009, added to the Massachusetts Prohibited Plant List (http://www.mass.gov/agr/farmproducts/proposed_prohibited_plant_list_v12-...).  There are many other Euonymus species that are potentially as gregariously spreading but they are not on the list, only because they are lesser known species.  I do in fact get lots of self-sown seedlings on E. sachalinensis. 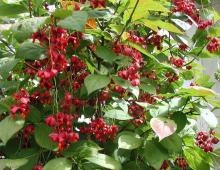