Campanula carpatica 'Blue Clips'... available at any garden center and well worth having for its summer display![attachthumb=1]

Its a beauty Lori. Is is 'Blue Clips' or 'Blue Chips'?  Instinct and memory tell me it is 'Blue Chips' originally, and maybe via garbled transliteration of a worn label it has become 'Blue Clips'. Another mystery... ;)

Good question, Mark!  My recollection is, strangely, the opposite... I knew it first as 'Blue Clips' (and also 'White Clips') but later noticed references also to '___ Chips'... ??

Another edit:  Having said that though, 'Blue Clips' and 'White Clips' seem to be the original names, as bestowed by Benary, according to Lewis and Lynch in Campanulas:  A Gardener's Guide.  Graham Nicholls in Dwarf Campanulas also refers to 'Clips' rather than 'Chips'.

Yes, Graham Nichols book Dwarf Campanulas has two mentions of C. carpatica 'Blue Clips', no mention of 'Blue Chips', so I suppose that is the right one.  Both names are used on the web, memory didn't serve me, but then again, I tend towards dyslexia ;)

Benary's nursery still exists in Germany and they currently list three Campanulas with "Clips®" in the name. These are

They introduce quite a number of plants each year but these campanulas are pretty old ones now (or at least I seem to have been seeing the name for a good long time.)

Thanks for that confirmation, Malcolm.

Here's one that started blooming today... Campanula thyrsoides, far from its native habitat in European subalpine meadows.  It's one of the few Campanula with "yellow" flowers...  well, sort of yellowish, at least.  ;) This article (http://www.botany.unibe.ch/planteco/abstr_repr/PerspPlantEcolEvolSyst_9_...) states that the species may take up to 8 years to bloom in the wild.  Fortunately, its cycle seems to be much accelerated in the garden!  It is monocarpic, though. (And, on that note, to think that I was concerned at one time that the last of the seed-raised batch had finally bloomed and I'd no longer have it... actually, it turns out I've got about a dozen of them scattered about.  This is one monocarp/biennial that seems to want to hang around!) 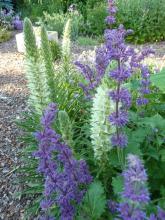 Lori - I too have Campanula thyrsoides flowering for the first time - at least what is left of it.  Rabbits ravaged the leaves early on and the poor plant is somewhat distorted but the blooms are there nevertheless.  Even if it is monocarpic, is there a possibility that it will produce viable seeds? - must be, since I got seeds from the NARGs seedex a few years ago.  Saw it growing a few years back at the Montreal Botanic Garden - really nice.  Terribly dry and hot here and most plants suffering.  However, Ipomopsis rubra is doing magnificently despite it.  Must make sure they are placed where they can be seen by passers by on the street.  Not hard to spot as they are very tall and very red.  Fran

Fran, my plants have produced loads of viable seeds.  (Having said that, it's getting monocarps/biennials to be self-sustaining in my yard that I often have problems with - maybe due to the mulch - not a problem with this one though.)

Campanula thyrsoides is nice.  We have it in the Aroboretum rock garden, too, although it doesn't seem to like it very much.  When I grew it, I was afraid it was going to have TOO many seeds.  One spike must produce millions!  It scared me a little, so I used them for a flower bouquet for Mom.

Lori, what is that blue/purple companion in the photo?  It sure makes a splashing combination with the campanula.