I'll try again, hope my internet connection is better than yesterday, I was not successful...lol Uploading pics seemed really slow, but that could have been my connection too..

Lots of great plants, Lori! Your tufa bed is looking very good. Did you ever re-do the soil to a less rich blend or is this all growing as you first built it?
Trond- the habitat you describe for the Limonium  makes it sound like something for me to try around the lower edges of my rock gardens- generally heavyish native soil and moist..
Several Saussureas have decided to flower this year, mostly from (I think) 2010 sowing from Holubec seed. I received about a half dozen  species in seed, but ended up with plants of 3- all nice plants, though none are the really weird, cool species that made me interested in the first place. I've since added several more from a different source, but none of the extreme form species, I'm just hooked on the genus now :)
I wonder if the couple that came with tentative ids from Holubec would be nameable now that they have flowered, though the flowers seem quite similar on several.. I'll put a few more pics in the Saussurea thread.
Saussurea cf leontodontoides   This is the best of those I have for the smaller scale rock garden- being a low plant in leaf and flower- maybe 10-15cm high and after a couple of years getting close to twice that wide, in a nice mounding form with very nice silvery felted leaves. Flowers are more interesting than exciting (applies to all of these 3 spp). Interestingly, several plants of this died this past winter, which was not extreme, and the plants in two different beds had been outdoors here for I think 3 winters. The surviving plants showed no sign of damage and a couple are now flowering. Just goes to show losing single plants  really doesn't    tell you anything much!   Still I hope these flowers will be giving me seed so I can get some more back-ups going. Not sure how far this differs from leontodontoides proper, but I think that is more green. In the original plants from seed there was a bit of variability, including one plant with much more entire leaves, though that one died this winter. You can also  see some difference in the attitude of the  leaves between these two plants, but they are in different sites.
.

On to Saussurea nidularis. Attractive linear leaves, mostly smooth, but this is a larger plant than the above. Individual leaves probably around 1o-15cm long, and flowering stems probably more than 30cm tall- I need to take out a ruler to measure! Not 100% sure if the id was correct, as the description mentions pink bracts and a rounded inflorescence, which doesn't sound quite like this- but my conditions are doubtless different from where they came,, and first flowering, so maybe time will tell..... 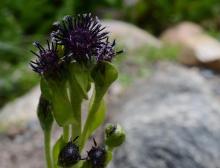 Saussurea aff superba. This was initially the most robust of the group, though I think nidularis may have overtaken it this year. Leaves are wider than the other two, though still longish, and a bit bristly/hairy. A couple of rosettes died last summer, and I was thinking I needed to move the survivors to a drier spot, but the largest plant is flowering this year. I think all of these clump to some extent, but the spreading by short underground stolons may be most obvious on this species. 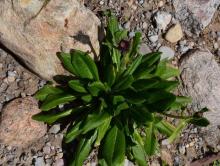 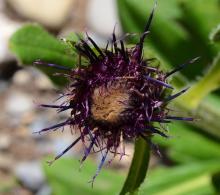 Glad you made your way back here, Cohan!   I was wondering how your garden was growing!

No, I never did change the soil in the first tufa bed - it's as it was, though the newer beds are much leaner.

Your plantings are looking terrific!  Very attractive foliage on those species, and I find the flowers quite interesting too.  The flower close-ups on the first two remind me of the flower structure of Carduncellus pinnatus.   I hope you will more post photos of S. aff superba when the flowers are fully open.

Your comment about Saussurea -  "though none are the really weird, cool species that made me interested in the first place" - is kind of funny as that's been my experience too.  I was hoping to grow the really cool ones like S. stella and S. medusa but no luck with those!!  S. eopygmaea (very grassy foliage) seems to be doing well but shows no sign of blooming yet.

I grew S. nepalensis (or so the seed was labelled anyway) from seed last year and they looked promising as youngsters: Hmm, not quite what I had in mind, LOL!  (Where's that "rolling eye" emoticon when you need it?)  Oh well, so long as they don't start taking over, I'll keep them to see what the flowers look like.  It looks like one of them may yet bloom.

Convolvulus holosericeus from seed in 2010 (seeds from M. Pavelka, 1500m, Bozkir, Turkey); the leaves look broader on this plant than on photos I can find by googling:

Campanula raineri from seed in 2012 - the giant flowers on the tiny plant are very cute!

This Aethionema saxatilis ssp. oreophila has been blooming since May!  Pretty amazing!  This genus really seems to pull its weight in the garden.

Lactuca intricata - interesting for its spiny structure.  If it decided to put on a big burst of bloom all at once, it might be quite spectacular!  (Instead, it seems to dole out blooms in ones and twos...)

A small bee resting in a flower of Inula acaulis ssp caulescens:

Saussurea has always seemed a "mystical" genus to me.  The touted species are so out-of-this-world!  All that fuzz in my humid, hot and stagnant summers would  mean sure death.  A few martagon lilies do a fair impression sometimes... 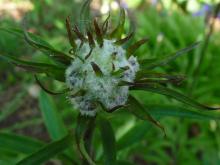 Still, the unusual flowers of the so called "so-so" species are really nice, Cohan

Lori, those three pics of Saussurea nepalensis look like three different species!  What a chameleon.

That's a pretty impressive bloom period with Aethionema,.  And it doesn't seem like there is an end in sight!  Has it been producing seed along the way, or have developing pods withered?

Rick, that's an amazingly furry martagon!  I have one with furry buds but nothing like that.

Lori, those three pics of Saussurea nepalensis look like three different species!  What a chameleon.[/quote]

It will be interesting to find out what the heck it is, if not S. nepalensis... does anyone know?

That's a pretty impressive bloom period with Aethionema,.  And it doesn't seem like there is an end in sight!  Has it been producing seed along the way, or have developing pods withered?[/quote]

The Aethionema is forming seeds along the stems too, still very green... it's just amazing how slow and drawn out the whole process has been.

Here are two saussureas in the Himachal Pradesh.  Saussurea obvallata is very much a cabbage, while S. gossipiphora is a furry little beast.  The former was growing at 13,000 feet, while the latter was found around 14,000 feet elevation.  Is it a surprise they're a challenging to keep in character in gardens?  :-) 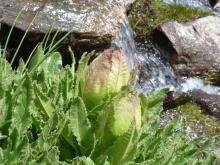 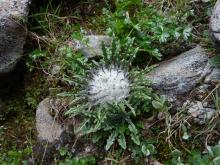 Wow, now those are what I had in mind!  That must have been an amazing trip, Claire.  When were you there?

I trekked with the Alpine Garden Society July 3 -  23, 2011.  It was my first time trekking (and sleeping in a tent at altitude).  I went primarily to see the primulas and was not disappointed -- they were fabulous and I learned so much.  Tour leaders Margaret and David Thorne were super.

Those are both nice ones, Claire- and great fun to have been able to see them in nature!  Lori- I have S nepalensis looking nothing like yours at any stage, and with buds coming in a very different flower structure than the others that have flowered. Pics to come but not now, work soon. I also have two other species, larger, presumably, more subalpine flower meadow types, I think, S riederi from last year - leaves like a much smaller (though not small) Petasites sagittatus and an unidentified  sp from seed this year. Pics of all to come.

I do very much like the species I have, but still hope for some of the 'cool' ones!

Cohan, I'll look for ripe seed on the Limonium if I am there at thr right time!

Great plants folks, haven't had much time to read the posts lately. Been on Svalbard for a week and returning tomorrow.

Here are a few plants. 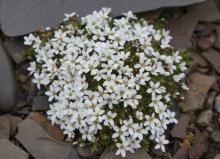 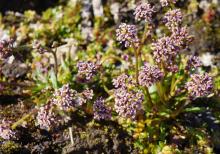 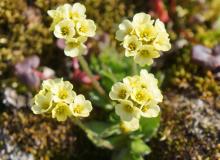 Spectacular plants, Trond!  There's my favorite, Erigeron humilis, looking as charmingly furry as it does here!  Mertensia maritima tenella is extraordinary...  but then, they all are wonderful!

Here is a little, single stem of Castilleja rhexifolia, bought last year.  I'm very pleased it's survived!  I planted two... haven't managed to locate the other again yet. Dracocephalum multicaule has become quite attractive (though this is the smaller flowered of the two plants from the same seed batch): Here is a slightly better showing now from Lactuca intricata... a dozen flowers at once is a great improvement over 2 or 3!