I thought I was the only one who didn't had this beauty  ;D

A new onion for me: Allium listera flowers now! (I know you have it Mark!) Sadly the leaves are somewhat damaged - guess by what!

Awesome!  Trond, where did you get your seeds or bulbs of this species.  I originally had 3 clones collected by Darrell Probst in China, still have 2 clones, they are markedly different.

For those Allium fans on Facebook, I've been putting up Allium pictures mainly from my garden in a special Allium album, now with some 300 or more pictures:

Mark, I bought one bulb from Bjørnar last spring (http://planteliste.net/a-d.html). I had almost forgotten that I had it so I was surprised when I saw the flower stem.

Stephen, I'll collect seed if I get any.

It is indeed an antennaria and I wish I could tell you which one with confidence - perhaps A. alpina but I'm not sure.  The flowers are white and on short stalks (3-4") and the leaves are quite rounded, which I'm not sure fits with A. alpina: 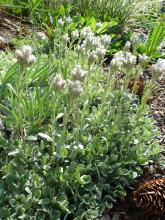 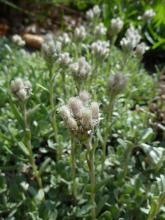 Not being sure of its identity, unfortunately, I did not collect any seeds from it.   ???

Plants of Allium aff. thunbergii DJH (Dan J. Hinkley) is in fine flower on this rainy day. I believe this is actually the closely related A. sacculiferum, a species closely related to thunbergii, with more dense heads of bloom, and stamens that aren't as long.  This goes around as Allium thunbergii DJH 272 as well, the DJH referring to Dan J. Hinkley. In the link below are photos from my same plants taken in autumn 2010, these plants not nearly as mature as the ones pictured below.http://www.srgc.net/forum/index.php?topic=5766.msg167658#msg167658(oh, I just noticed, that the photos I posted on SRGC in 2010, are exactly the same day of the year, Sept 29th! A very consistent plant) 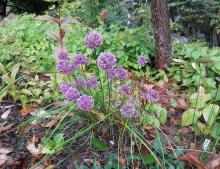 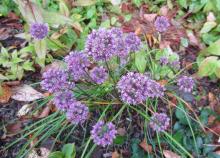 At peak bloom now are two Asian allium species, the purple has been distributed as Allium aff. thunbergii DJH (Dan J. Hinkley), but is likely to actually be Allium sacculiferum.  The white allium is a particularly handsome robust form of Allium thunbergii alba I picked up at a general garden center.  In the first photo, the composition was chosen to show the typical disposition A. thunbergii flowers; lax, flowers facing out and downwards, an informal mop-head, florets with very long stamens; whereas Allium sacculiferum (almost always misidentified as thunbergii) has tight spheres of bloom, shorter pedicels thus smaller inflorescence globes, much higher number of florets per head, among other differences. 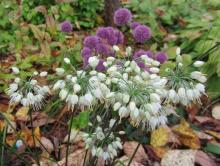 Two views of Allium thunbergii alba and purple Allium sacculiferum.  In the first of the three views, if you look closely, a tiny Allium virgunculae is starting to show purple bud color in the lower right. 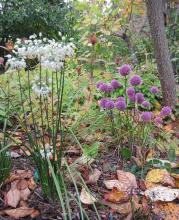 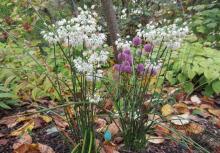 A closer view of Allium sacculiferum; the saucer-shaped forets are densely packed into spherical heads, better photos than the last ones I showed on a dreary drizzly day. 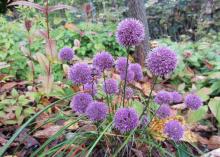 View of Allium thunbergii alba, with such long and lovely "eyelashes": 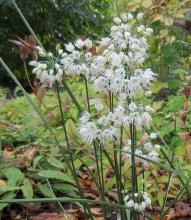