Mine don't have that characteristic either - just plain round stems.

Then you have a tiny oneOr your bulb was wrong labelled

This is Allium henryi from China, among the small elite group of "blue-flowered" alliums.  I ordered it from Chen Yi as Allium cyathophorum (my goal was to get the type species A. cyathophorum, rather than the ubiquetous A. cyathophorum var. farreri that goes around and masquerades as dozens of other species).  It turned out to be misidentified, as were all Alliums I tried from Chen Yi, but I'm happy it keyed out to A. henryi, a species that is very rare in cultivation, and among the nice late-summer blooming species.

The plant had previously been under the canopy of a Fringe Tree (Chionanthus) which was largely destroyed by an early snowstorn October 2011 when the tree's leaves were present, causing terrible breakage, the canopy of shade was lost.  On the day of this photograph, it was in the 90s F with glaring sun, thus the photos look washed out, the flowers themselves a bit faded in color too, but it is a nice small Allium with few-flowered widely-spaced light blue flowers and exserted stamens.  The foliage is shiny, flat, arching, and as these narrow-leaved species go, a tad bit broader-leaved than A. sikkimense.  After relentless moonsoon rains and hot steamy heat, many flowers passed without making seed, although a few later florets might produce viable seed (as long as the thunderstorms and deluge rains subside).

Allium henryi, a view of the whole plant, the flowers, and the foliage: 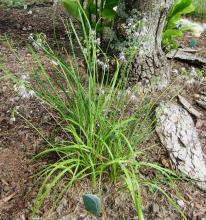 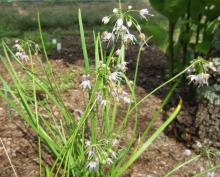 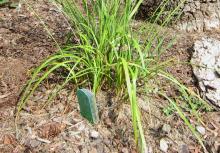 Hopefully this is actually what the label says it is. Allium wallichii. It has square stems . 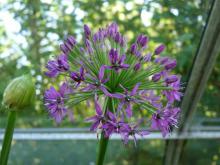 Palustris, it looks correct to me.  This is a most variable species, sometimes the heads are somewhat fastigiate and few-flowered, but can be more densely flowered with hemispherical heads as well, here is one such link showing a form that looks like yours.  By the way, there are some near black red forms that are striking.http://plantsoftibet.lifedesks.org/pages/36677

From our 2010 August Chapter plant sale, I have a seedling grown by one of our members that bloomed this year, bought as Allium daghestanicum.  From what little info I can find it seems right...  At 8.5 inches in a pot with a medium that is very fast draining/drying, it is probably smaller than what it might normally be.  What do you think? 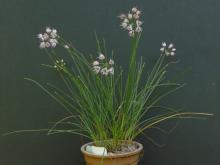 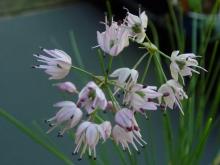 Most flowers have long pistils, but some short(?) 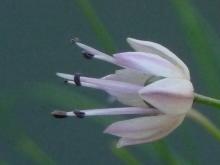 Foliage is quite thin for an allium, and stiff. 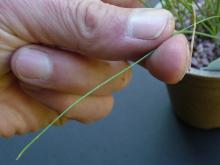 I drew a cross section of a leaf. 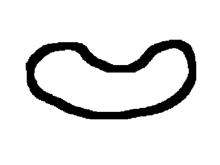 Two of my Allium wallichii now in flower 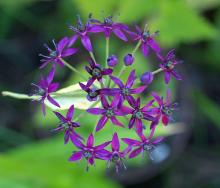 From our 2010 August Chapter plant sale, I have a seedling grown by one of our members that bloomed this year, bought as Allium daghestanicum.  From what little info I can find it seems right...  At 8.5 inches in a pot with a medium that is very fast draining/drying, it is probably smaller than what it might normally be.  What do you think?

For decades, what was offered up as Allium daghestanicum in the seed exchanges turned out to be Allium senescens, it was impossible to get the true species. I received seed of the true species from Peter Hanelt in Germany, along with many other accurately named species.  I offered seed of this a number of times, and I'm pleased to see the true species now making the rounds.  So, Rick, your plants look correct.  They do in fact have rather firm leaves, even though very narrow.  The plants can get larger than the dimensions you give, but this species remains a very pleasant late-blooming Allium of modest effect, I like it, and your nicely photographed plants look correct.

Two of my Allium wallichii now in flower

Two nice forms there Stephen, one looking rather similar to the plant Palustris shows us.  For some reason, this species gives me great difficulties. I once flowered a dark red-black form from a wild collection in China by Darrell Probst, but it died out quickly.  I had lots of seedlings from your seed last year, and these too died out... not sure what I'm doing wrong to grow this one.  I need to keep on trying.

I also have some Allium wallichii seedlings.  I had hoped the ones that seemed to die after a month or so, just went dormant.  I guess I will see, but I am not to hopeful.

Thanks for the confirmation, Mark, regarding Allium daghestanicum.  It seems to constantly run out of water in that pot, and I guess that is what it likes!

While trying to research the species, I came across this PDF: A molecular phylogeny of wild onions.  It has a useful and easily understood phylogeny chart for the genus on pages 1165-66.http://www.google.com/url?sa=t&rct=j&q=allium+daghestanicum&source=web&c...