Mark, do you have these onions ;)http://yuzawa-engei.net/11English/02Allium/Allium_page.html

Mark, do you have theese onions ;)http://yuzawa-engei.net/11English/02Allium/Allium_page.html

I do!  Trond, an excellent nursery link (they have seed too) of many desirable plants.

I love the autumn alliums, and I'm happy to have found plants listed as Allium thunbergii alba at a local nursery this late summer, but in fact since it is such a small grower (about 3-4" tall, 7.5-10 cm)) and fewer-flowered than most thunbergii forms, maybe this is a white form of Allium virgunculae instead.  After drenching rains for several days, the flowers look perfect today.

View of Allium "thunbergii" or virgulculae alba with Saxifraga fortunei blooming in the background: 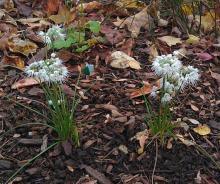 Still waiting for the tiny Allium virgunculae to open its flowers, now still in tight bud, with flower stems at about 2" (5 cm) tall. 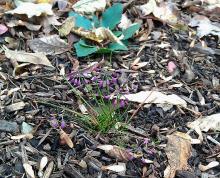 A reliable old planting of Allium thunbergii 'Ozawa' planted at the base of a Magnolia tree. 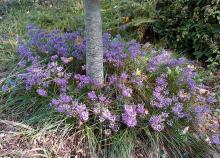 Two views of a tall form of Allium thunbergii sent to me by a friend last year. 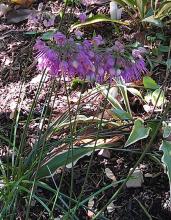 Those little guys are so sweet!

You lucked out, Mark!

The issue of harvesting seed on the late blooming alliums comes up sometimes. Some are starting to set seed pods, and depending on the year and the weather, it is sometimes possible to get some seed. In this photo we see some developing pods on Allium aff. thunbergii (probably A. sacculiferum) collected by Dan Hinkley.  If the pods are left on to mature, it is likely they'll succumb to soaking rain and snow, so they can be picked in the green and allowed to dry out inside to get some viable seed. 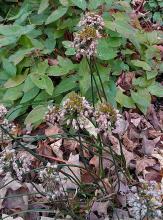 The very small form of Allium virgunculae that I showed in bud earlier finally opened its flowers, this shot taken Oct. 25, 2011... a tiny delight. 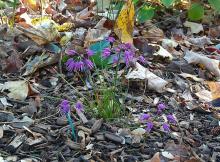 A seedling grown from Allium thunbergii 'Ozawa' has for the last 4-5 years proved to be a rather tall robust form of A. thunbergii.  This year it is flowering later than normal, still just mostly in bud with a few first florets opening.

Below... a seed-grown plant from Jim Jones' variegated form of Allium nutans shows variable amounts of variegation, some leaves nearly totally variegated, other leaves partially variegated, and many leaves all green.  The flowers are "uggo" (ugly) but I'm happy to have at least one of the seedlings grow on and show some level of strong variegation. Last photo, I was sent bulbs from the Netherlands of an Allium simply called Allium 'Cameleon' (I am told, the European spelling of the word leaves out the "h" or "chameleon" as we spell it in the US.  This plant was reputedly an American species, but is actually a Mediterranean species; mostly likely A. trifoliatum of A. longanum.  The fact the foliage emerges in the fall and remains through the winter (and the broad hairy-ciliate edged leaves) 100% rule this out as an American species; it is most certainly one of the two species I mentioned. I was in Kew Gardens in London on 1st October, a day when record temperatures for the time of year were being recorded. It was over 30C that day. In the alpine house there were a couple of thunbergiis which were both still in bud. The first is "Ozoke", the other with no cultivar name. Both were pot grown: 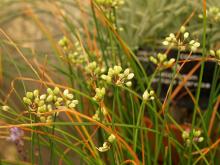 Stephen, I like the really grassy clump-forming one in the second photo, looks more like a virgunculae variety.  I used to have such a form, would like to rebuild my collection of these sweet little fall bloomers.  Need to refresh my memory of the recent revised taxonomy on the thunbergii-virgulculae clan (that I had posted on SRGC), here are some links: 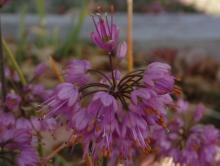 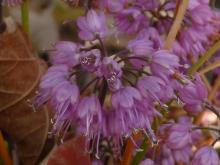 Very nice Rick.  In your photos, the pedicels look dark charcoal color instead of green, which is particularly attractive!

Very nice Rick.  In your photos, the pedicels look dark charcoal color instead of green, which is particularly attractive!

A trait that occurs only with the onset of cold (freezing?) weather. But the stems are similarly colored, too.