Near the Oxytropis (?) above, I was hoping to find another plant I saw finished flowering last year, which I thought was Sax oppositifolia, a plant I have never seen in person... No such luck, I'd just found the pea when someone started to vociferously protest my presence in that area, and I had to hurry up and shoot the pea and get out! 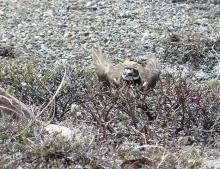 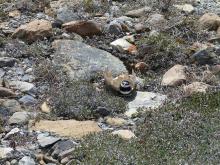 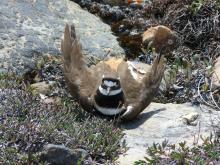 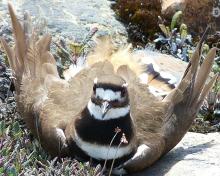 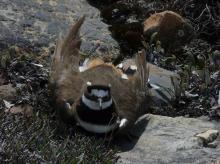 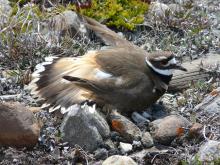 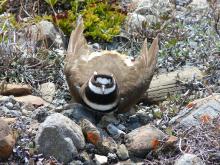 Not wanting to cause her (?) stress, much less accidentally tread on her eggs, I hurried up and left, much as I wanted to spend more time in the more mature plant community in that section.. my only reward was finding more of the Oxytropis on the bank as I left. I'm familiar with birds/behaviour of this sort from fields and shores near home, but haven't looked up a species for this one; I saw a couple more elsewhere on the site, but not close enough to get them so worked up....

I'm sure not good at Oxytropis/Astragalus but I don't think your plant is Oxytropis podocarpa... the proportion of flower size to leaf size seems off.  O. podocarpa has very fine, almost feathery leaves (that I hope I'd recognize on sight by now  :rolleyes:) and smaller flowers than that plant.  (I wish I could pull up some photos for comparison but, in the recent computer problems I had that resulted in the emergency purchase of a new one, I didn't lose my pix but they all lost their labels, if you can believe it! So I have some 16000 anonymous pictures... grrrr.)  Is it definitely an Oxytropis rather than an Astragalus?  I'll post some pix of the difference in the keels that is supposed to be the determining factor.  It's very nice, whatever it is!

The little Brassicaceae is pretty showy for its size, especially against that stark background.

The bird is a killdeer (Charadrius vociferus)... Yup, almost impossible to find their nests except by accident... buffy, speckled eggs in a shallow scoop, no nesting material at all... although they certainly let you know you're in the area!

Great photos Cohan, and I love the killdeer, yes, birds of all stripes and sorts certainly do let you know when you've invaded their "personal space", of eggs and babies. ** We have a couple of mother "hens" that must have nested very close to the front of the house and apparently they would rather we didn't step out on the front porch at all! Much racket until we get a few steps away...

Thanks, Lori and Faith, I thought the bird looked and acted  like a Killdeer, which we have around here, but I'm used to just seeing them with the naked eye, not in zoon shots, so I had not checked markings and had no idea if they nest way up there!

And  certainly am not certain of anything about that pea, Lori; in fact I had originally called it Astragalus for no good reason, but I was going through a very old book I have, Rocky Mountain Wildflowers by A.E. Porsild with paintings by Dagny Tande Lid, and came across the Oxy which looked just like this plant to me (well aware that 'looks like' may not be helpful when there can be numerous similar..lol).. they mention flowers at 2cm which sounds about right.. the plants were tiny, flat and leaves very small and divided.. when it came time to post, I realised I didn't get any really good close shots, probably partly because the bird wanted me to leave, though I'm usually hurrying on these trips, anyway...lolhere's another couple of crops, though they may not add any useful information...sharpened and added contrast 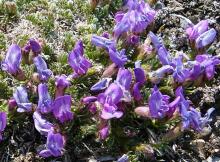 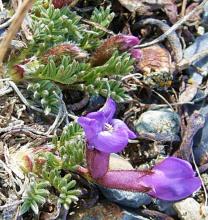 again, looks about right to me--esp the first view with purple flowers ( I expect some variation on those, hard shades for some digital cameras), though I may be overlooking some important floral characters? Also, leaves may not be fully emerged on my shots.. I'm going to dig for last year's seed pod views, if they exist....(BTW, losing labels on your photos would be awful! I'm trying to do a double back-up- external hard drive and DVD, though I'm way behind on the second; and picasa, so 3, I guess, though that's not all photos, and smaller versions)

Here it is from last year, in fruit, not a close shot, unfortunately, and a couple more of mature foliage-- 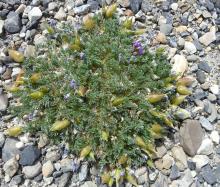 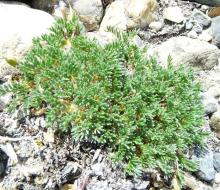 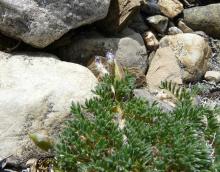 and couldn't resist this view with Hedysarum boreale

full album (one of many from that day!) from June 26, 2010:https://picasaweb.google.com/cactuscactus/AlbertaRockyMountainsJune26201...

Great photos Cohan, and I love the killdeer, yes, birds of all stripes and sorts certainly do let you know when you've invaded their "personal space", of eggs and babies. ** We have a couple of mother "hens" that must have nested very close to the front of the house and apparently they would rather we didn't step out on the front porch at all! Much racket until we get a few steps away...

Are they killdeers in your front yard? We have wrens which also make a fuss if you get too close, and they are right between the two houses...lolThere's a spot in the bush on the farm where I sometimes walk where crows were presumably nesting, and they would set up a racket if I was within--not sure, 50 metres or more?..lol

last for this album: https://picasaweb.google.com/cactuscactus/AlbertaRockyMountainsMay312011...

Another pea of uncertain name-- foliage looked like the high altitude Hedysarum boreale common at this site--rather fleshy leaves, but only some plants had these tumble-weed like structures of last year's stems.. Looking at last year's pics, I was reminded that there was another pea--possibly an Astragalus, with pale flowers and similar semi-prostrate stems and similar leaves.  Looking at the old pics, I cannot tell for sure which plant would have had these dried stems, but it seems like the Hedysarum show more dried stems in the photos.. not sure why only some plants have this, if its not a different species.. also a view of the typical miniature forest- a couple of Dryas spp, a couple of Arctostaphylos, various peas, etc... 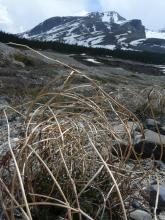 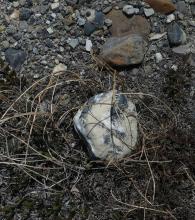 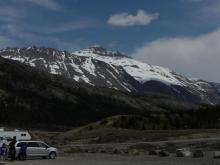 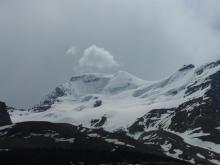 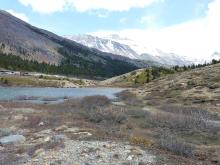 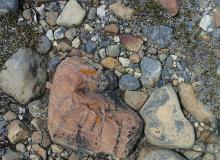 I take it back... it's definitely Oxytropis podocarpa.

Thanks for the confirmation :) I know its hard to tell from photos taken at a particular time and place and angle etc!

Your wonderful vista and plant shots are making me very restless Cohan.  :D

I feel an urge to get out in the 'field' again down here although it will have to be coastal as snow is forecast to lower to 600mtrs in the next day or so and it depends on how soon my foot mends after badly rolling the right ankle 10 days ago  :'(---a sign of the aging process is that it's taking longer than i hoped for ...... >:(